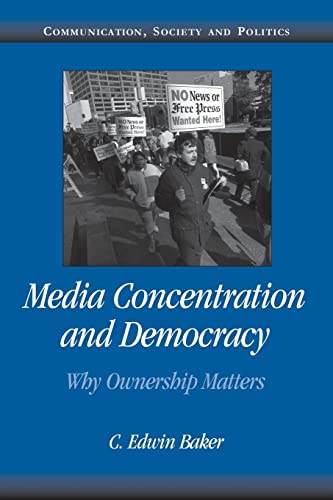 In Stock
£12.99
This book provides a normative critique of mass media ownership concentration. It emphasizes a democratic need to distribute communicative power more widely and to prevent abuse of media power. It also shows why ownership dispersal can be expected to improve the quality of media content.
Very Good
Only 3 left

Firmly rooting its argument in democratic and economic theory, the book argues that a more democratic distribution of communicative power within the public sphere and a structure that provides safeguards against abuse of media power provide two of three primary arguments for ownership dispersal. It also shows that dispersal is likely to result in more owners who will reasonably pursue socially valuable journalistic or creative objectives rather than a socially dysfunctional focus on the 'bottom line'. The middle chapters answer those agents, including the Federal Communication Commission, who favor 'deregulation' and who argue that existing or foreseeable ownership concentration is not a problem. The final chapter evaluates the constitutionality and desirability of various policy responses to concentration, including strict limits on media mergers.

"Among the many First Amendment theorists in America's law schools, Ed Baker stands out for combining a comprehensive theory of the media that democracy needs to thrive with a thorough examination of the empirical economic and sociological evidence that makes his case. This book is a must-read for anyone who wants to question the deregulatory, hyper-commercialism ideology that has dominated media policy in the United States for the past couple of decades or who wishes to participate in the ongoing debate over media ownership." Mark Cooper, Consumer Federation of America
"Edwin Baker has produced a magisterial study of media concentration (and, now, online audience concentration). It will be of as much interest to people in Europe, Africa, and Asia as in the United States because it addresses a problem in all these continents that has been plausibly presented as no longer existing, and it comes up with practical solutions." James Curran, University of London
"C. Edwin Baker is arguably the most important scholar on media ownership and the relationship of media, media policy, markets, and democratic practice in the United States today. Media Concentration and Democracy: Why Ownership Matters is his finest book to date and is certain to become a classic text. It also proves indispensable analysis for one of the great policy issues of our times. Anyone who reads this book will have their positions on the issue challenged and strengthened." Robert W. McChesney, University of Illinois at Urbana-Champaign
"C. Edwin Baker is the nationn's most insightful media scholar, and Media Concentraion and Democracy is a feast of important ideas. This is not just the best book on media concentration. This timely book is packed with original and significant discussions of democracy, the First Amendment, media economics, the Internet, and media policy." Steven Shiffrin, Cornell University
"Ed Baker is one of America's most important voices on mass media policy. In this thoughtful, serious, and comprehensive book, he explains why the structure of media markets is so crucial to preserving democracy and the right ways to meet the challenge of media concentration." Jack M. Balkin, Knight Professor of Constitutional Law and the First Amendment, Yale Law School
"Baker's book is an excellent analysis of the highly complex world of media ownership policy. The approach interweaves legal and political argumentation in a fashion that is compact and rigorous. The book is a substantial contribution to debates about media ownership and the regulation of markets in general. It would be appropriate for upper level undergraduate courses in media policy and a variety of graduate courses related to law and public policy." - Thomas Shevory, Ithaca College, The Law and Politics Book Review
"In Media Concentration and Democracy, theorist C. Edwin Baker, a University of Pennsylvania law professor, offers a comprehensive, idea-packed examination of media concentration." Loren Ghiglione, Northwestern University

C. Edwin Baker is the Nicholas F. Gallicchio Professor of Law at the University of Pennsylvania Law School and has been on the faculty at Penn since 1981. He also taught at NYU, Chicago, Cornell, Texas, Oregon, and Toledo law schools and at Harvard's Kennedy School of Government, and he was a staff attorney for the ACLU. He is the author of three earlier books: Media, Markets, and Democracy (Cambridge University Press, 2002), which won the 2002 McGannon Communications Policy Research Award; Advertising and a Democratic Press (1994); and Human Liberty and Freedom of Speech (1989). He has written more than fifty academic articles about free speech, equality, property, law and economics, jurisprudence, and the mass media, in addition to occasional popular commentary.

GOR009939580
Media Concentration and Democracy: Why Ownership Matters by C. Edwin Baker (University of Pennsylvania)
C. Edwin Baker (University of Pennsylvania)
Communication, Society and Politics
Used - Very Good
Paperback
Cambridge University Press
2006-12-11
272
0521687888
9780521687881
N/A
Book picture is for illustrative purposes only, actual binding, cover or edition may vary.
This is a used book - there is no escaping the fact it has been read by someone else and it will show signs of wear and previous use. Overall we expect it to be in very good condition, but if you are not entirely satisfied please get in touch with us.