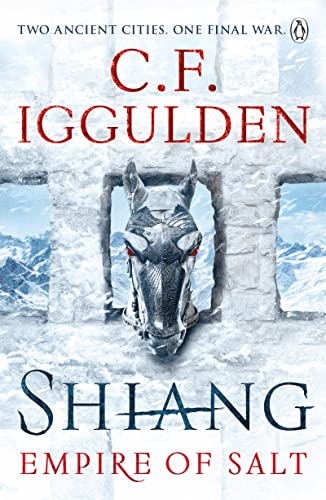 The second thrilling instalment in the bestselling epic fantasy series, the Empire of Salt.

'Must read now! Iggulden is clearly having fun pitching his heroes and villains into bloody combat' SciFiNow
___________

In Shiang, the young king rules without dissent. Swordsmen stand watch on every corner, looking for the first sign of rebellion.

Yet in one swift move, order is overturned.

The balance of centuries is undone in the sudden spill of blood - and in the darkness, something terrible returns to Shiang . . .

Far to the west, four Shiang masters approach the city walls of Darien. The sword saint and his companions have crossed a continent to bring an old man home for punishment.

And they will not be denied, even if the whole city stands in their way . . .

Fans of Joe Abercrombie, Bernard Cornwell and Game of Thrones will be gripped by this bloodthirsty adventure.
___________

'Iggulden is in a class of his own' Daily Mirror

'One of our finest historical novelists' Daily Express

Iggulden is in a class of his own

One of our finest historical novelists

* Daily Express *
C. F. Iggulden is one of the most successful authors of historical fiction writing today. He has written three previous bestselling historical series and two stand alone novels: Dunstan and The Falcon of Sparta. The Sword Saint is the final novel in his epic fantasy series, Empire of Salt.
GOR009972655
9780718186777
071818677X
Shiang: Empire of Salt Book II by C. F. Iggulden
C. F. Iggulden
Empire of Salt
Used - Very Good
Paperback
Penguin Books Ltd
2019-07-11
368
N/A
Book picture is for illustrative purposes only, actual binding, cover or edition may vary.
This is a used book - there is no escaping the fact it has been read by someone else and it will show signs of wear and previous use. Overall we expect it to be in very good condition, but if you are not entirely satisfied please get in touch with us
Trustpilot