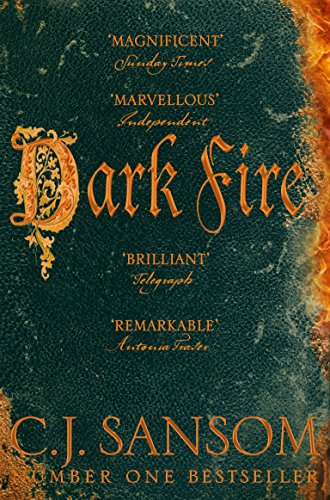 England, 1540: Matthew Shardlake, believing himself out of favour with Thomas Cromwell, is busy trying to maintain his legal practice and keep a low profile. But his involvement with a murder case, defending a girl accused of brutally murdering her young cousin, brings him once again into contact with the king's chief minister - and a new assignment . . .

The secret of Greek Fire, the legendary substance with which the Byzantines destroyed the Arab navies, has been lost for centuries. Now an official of the Court of Augmentations has discovered the formula in the library of a dissolved London monastery. When Shardlake is sent to recover it, he finds the official and his alchemist brother horribly murdered - the formula has disappeared.

Now Shardlake must follow the trail of Greek Fire across Tudor London, while trying at the same time to prove his young client's innocence. But very soon he discovers nothing is as it seems . . .

Historical crime fiction is sometimes little more than a modern adventure in fancy dress. Not so the novels of C. J. Sansom, whose magnificent books set in the reign of Henry VIII bring to life the sounds and smells of Tudor England . . . Dark Fire is a creation of real brilliance. * Sunday Times *
Sansom gives us a broad view of politics - Tudor housing to rival Rachman, Dickensian prisons, a sewage-glutted Thames, beggars in gutters, conspiracies at court and a political system predicated on birth not merit, intrigue not intelligence . . . like many before him, he offers an enjoyable history; but this is also an ethically informed one . . . a strong and intelligent novel. * Guardian *
One of the author's greatest gifts is the immediacy of his descriptions . . . But it is Shardlake himself who steals the show. His honesty and humility shine out in a dark world where murder and mayhem are the order of the day. -- Colin Dexter
Spellbinding . . . Sansom's vivid portrayal of squalid, stinking, bustling London; the city's wealth and poverty; the brutality and righteousness of religious persecution; and the complexities of English law make this a suspenseful, colourful and compelling tale. * Publishers Weekly *
Dark Fire is wonderful stuff, featuring a sort of Tudor Rebus who moves through the religious and political chaos of the 1540s with sinister elan. -- James Naughtie * Glasgow Herald *

GOR007327978
Dark Fire by C. J. Sansom
C. J. Sansom
The Shardlake series
Used - Very Good
Paperback
Pan Macmillan
2015-07-16
608
1447285840
9781447285847
Winner of CWA Historical Dagger 2005 (UK)
Book picture is for illustrative purposes only, actual binding, cover or edition may vary.
This is a used book - there is no escaping the fact it has been read by someone else and it will show signs of wear and previous use. Overall we expect it to be in very good condition, but if you are not entirely satisfied please get in touch with us.