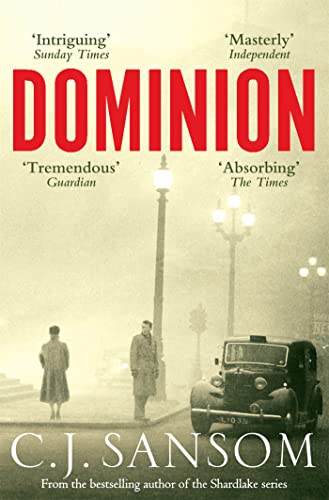 At once a vivid, haunting reimagining of 1950s Britain, a gripping, humane spy thriller and a poignant love story, with Dominion C. J. Sansom once again asserts himself as the master of the historical novel.

1952. Twelve years have passed since Churchill lost to the appeasers and Britain surrendered to Nazi Germany after Dunkirk. As the long German war against Russia rages on in the east, the British people find themselves under dark authoritarian rule: the press, radio and television are controlled; the streets patrolled by violent auxiliary police and British Jews face ever greater constraints. There are terrible rumours too about what is happening in the basement of the German Embassy at Senate House.

Defiance, though, is growing. In Britain, Winston Churchill's Resistance organization is increasingly a thorn in the government's side. And in a Birmingham mental hospital an incarcerated scientist, Frank Muncaster, may hold a secret that could change the balance of the world struggle for ever.

Civil Servant David Fitzgerald, secretly acting as a spy for the Resistance, is given the mission to rescue his old friend Frank and get him out of the country. Before long he, together with a disparate group of Resistance activists, will find themselves fugitives in the midst of London's Great Smog; as David's wife Sarah finds herself drawn into a world more terrifying than she ever could have imagined. And hard on their heels is Gestapo Sturmbannfuhrer Gunther Hoth, brilliant, implacable hunter of men . . .

C. J. Sansom takes a break from his Shardlake series to offer Dominion, an absorbing, thoughtful, spy-politico thriller set in the fog-ridden London of 1952 . . . Part adventure, part espionage, all encompassed by terrific atmosphere and a well-argued "it might have been". -- Marcel Berlins * The Times *
An intriguing thriller set in an alternative Britain under the Nazis cunningly reanimates the post-war years as they might have been . . . The tale he sets within his parallel universe is at once exciting, sophisticated and moving. There will be few better historical novels published this year. * Sunday Times *
`This is a big novel with traces of a thriller, in which the good are good and the bad are very bad indeed . . . For readers who enjoy a grown-up adventure story Dominion is evocative, alarming and richly satisfying' Daily Express
Masterly . . . sketched with hallucinatory clarity . . . Sansom, whose Tudor mysteries showed his feeling for the plight of good people in a brutal, treacherous society, builds his nightmare Britain from the sooty bricks of truth . . . Dominion shows us what a truly broken Britain would look, and feel, like. -- Boyd Tonkin * Independent *
`A thriller which is also, and perhaps primarily, a work of alternative or counter-factual history, set in 1952 . . . in the manner of Robert Harris's Fatherland. There are fine things a-plenty here, and the plot unfolds compellingly and gallops along briskly. C. J. Sansom has brought off a nice double, writing a good thriller which invites you to ponder the different course history might have taken' Allan Massie, Scotsman
C. J. Sansom is fascinated by the abuse of power, so it's not surprising that, hot on the heels of his splendid Shardlake series, comes a novel set in a post-war Britain dominated by Nazi ideology . . . Dominion is absorbing, mordant and written with a passionate persuasiveness . . . Bravo! * Independent on Sunday *
One of the thrills of Dominion is to see a writer whose previous talent has been for the captivating dramatisation of real history creating an invented mid-20th century Britain that has the intricate detail and delineation of JRR Tolkien's Middle Earth . . . A tremendous novel that shakes historical preconceptions while also sending shivers down the spine. -- Mark Lawson * Guardian *
The chase is exciting and the action thrilling, but the really absorbing part of this excellent book is the detailed creation of a society that could so easily have existed. * Literary Review *
Fans of Robert Harris will love this. * Mail on Sunday *
Dominion is terrific. And no, this isn't one of those publisher-sponsored blurbs. I just fell in love with it. Nice and long, too. -- Stephen King

C. J. Sansom was educated at Birmingham University, where he took a BA and then a Ph.D. in history. After working in a variety of jobs, he retrained as a solicitor and practised in Sussex, until becoming a full-time writer. He is the bestselling author of the acclaimed Shardlake series, and the Spanish Civil War thriller Winter in Madrid. He lives in Sussex.

GOR005103730
Dominion by C. J. Sansom
C. J. Sansom
Used - Very Good
Paperback
Pan Macmillan
2013-09-01
736
0330511033
9780330511032
Short-listed for CrimeFest eDunnit Award 2013 (UK) Long-listed for International IMPAC Dublin Literary Award 2014 (Ireland)
Book picture is for illustrative purposes only, actual binding, cover or edition may vary.
This is a used book - there is no escaping the fact it has been read by someone else and it will show signs of wear and previous use. Overall we expect it to be in very good condition, but if you are not entirely satisfied please get in touch with us.