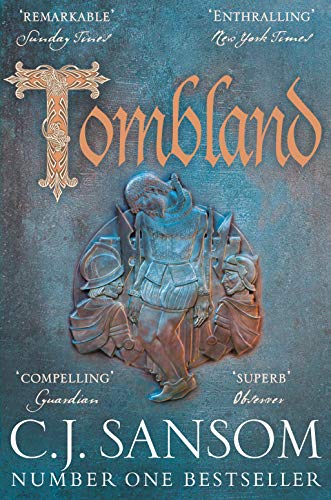 Tudor England is brought vividly to life in Tombland, the seventh novel in C. J. Sansom's number one bestselling Shardlake series, for fans of Hilary Mantel and Philippa Gregory.

The Sunday Times Number One Bestseller

England, 1549: Two years after the death of Henry VIII, England is sliding into chaos . . .

The nominal king, Edward VI, is eleven years old. His uncle Edward Seymour, Duke of Somerset, rules as Protector. The extirpation of the old religion by radical Protestants is stirring discontent among the populace while the Protector's prolonged war with Scotland is proving a disastrous failure and threatens to involve France. Worst of all, the economy is in collapse, inflation rages and rebellion is stirring among the peasantry.

Since the old King's death, Matthew Shardlake has been working as a lawyer in the service of Henry's younger daughter, the Lady Elizabeth. The gruesome murder of Edith Boleyn, the wife of John Boleyn - a distant Norfolk relation of Elizabeth's mother - which could have political implications for Elizabeth, brings Shardlake and his assistant Nicholas Overton to the summer assizes at Norwich. There they are reunited with Shardlake's former assistant Jack Barak. The three find layers of mystery and danger surrounding Edith's death, as a second murder is committed.

And then East Anglia explodes, as peasant rebellion breaks out across the country. The yeoman Robert Kett leads a force of thousands in overthrowing the landlords and establishing a vast camp outside Norwich. Soon the rebels have taken over the city, England's second largest.

Barak throws in his lot with the rebels; Nicholas, opposed to them, becomes a prisoner in Norwich Castle; while Shardlake has to decide where his ultimate loyalties lie, as government forces in London prepare to march north and destroy the rebels. Meanwhile he discovers that the murder of Edith Boleyn may have connections reaching into both the heart of the rebel camp and of the Norfolk gentry . . .

This is the seventh stunning novel in the bestselling Shardlake series, that began with Dissolution. Includes an Historical Essay from the author on Reimagining Kett's Rebellion.

Tudor England of 1549 is effortlessly evoked. The murder mystery absorbs, the characters are vivid and the history is seductive, but it's the author's inclusive humanity that lingers -- Elizabeth Buchan * Daily Mail *
Tudor terror tingles through C. J. Sansom's murder mystery novels . . . With remarkable expertise, sustained over more than 850 pages, Sansom weaves together a wide cast of characters and knits his murder story into a vivid tapestry of little-known historical happenings -- Peter Kemp * Sunday Times *
Sansom handles his huge cast with aplomb. This is a totally immersive and vividly written tale: compelling reading for history lovers and crime aficionados alike -- Laura Wilson * Guardian *
Sansom has the trick of writing an enthralling narrative. Like Hilary Mantel, he produces densely textured historical novels that absorb their readers in another time -- Andrew Taylor * Spectator *
Sansom blends impeccable historical research with a bloody good whodunnit * The Times *
Sansom has the rare knack of bringing the past to life in three dimensions . . . The honest Shardlake shines like a beacon * Daily Telegraph *
With the Shardlake series . . . Sansom has surely established himself as one of the best novelists around * Spectator *
Tudor England has never seemed so vibrantly alive and viscerally authentic than in the pages of the extraordinary Matthew Shardlake novels and after a four-year wait, C.J. Sansom's mild-mannered, middle-aged, hunchback lawyer makes a magnificent return. * Lancashire Evening Post *
Shardlake is a superb creation who gains more substance with each new book . . . A grand historical epic . . . 800 pages in Shardlake's company will always fly by -- Stephanie Merritt * Observer *
I really don't think crime writing comes much better than this, and as always with Sansom there is a wealth of enjoyment in his rich storytelling . . . This novel may have been four years in the making but it was well worth the wait. * Nudge *
Few writers can keep readers interested over the length of 866 pages, but C. J. Sansom is one of those . . . Built on substantial research and written with such confidence that the prose is both smooth and colourful, Tombland is a superb achievement * Literary Review *
Yet again C. J. Sansom has produced a novel so rich in historical detail and colour that the reader feels immersed in Tudor England * S Magazine *
A compelling story that rises above the stink of stables and open sewers . . . The marketplaces and hovels zing off the page, as does the colourful Norfolk dialect * The Sun *
When it comes to intriguing Tudor-based narratives, Hilary Mantel has a serious rival . . . A Scottish historian who had a career in law before turning to fiction, Sansom finds an ideal protagonist in Matthew Shardlake, the humane hunchbacked lawyer-sleuth, in his Tudor novels * Sunday Times *
A book to curl up with . . . At 880 pages it's a real doorstopper, but the inventive plot is a delight, and the characterization is as strong as ever * Independent *

C. J. Sansom was educated at Birmingham University, where he took a BA and then a PhD in history. After working in a variety of jobs, he retrained as a solicitor and practised in Sussex until becoming a full-time writer. Sansom is the bestselling author of the critically acclaimed Shardlake series, as well as Winter in Madrid and Dominion. He lives in Sussex.

GOR010082013
Tombland by C. J. Sansom
C. J. Sansom
The Shardlake series
Used - Like New
Paperback
Pan Macmillan
2019-09-19
880
1447284518
9781447284512
N/A
Book picture is for illustrative purposes only, actual binding, cover or edition may vary.
The book has been read, but looks new. The book cover has no visible wear, and the dust jacket is included if applicable. No missing or damaged pages, no tears, possible very minimal creasing, no underlining or highlighting of text, and no writing in the margins.