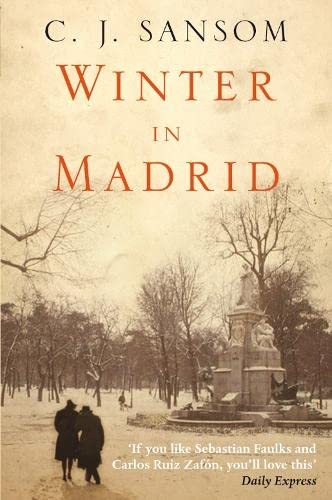 In Stock
£4.49
The bestselling, standalone historical novel from the much-loved author of the Shardlake series, C. J. Sansom
Like New Very Good Good
7 in stock

From the bestselling author of the Shardlake series, C. J. Sansom, comes Winter in Madrid, a standalone historical novel set in the aftermath of the Spanish Civil War.

1940: The Spanish Civil War is over, and Madrid lies ruined, its people starving, while the Germans continue their relentless march through Europe. Britain now stands alone while General Franco considers whether to abandon neutrality and enter the war.

Into this uncertain world comes Harry Brett: a traumatized veteran of Dunkirk turned reluctant spy for the British Secret Service. Sent to gain the confidence of old schoo lfriend Sandy Forsyth, now a shady Madrid businessman, Harry finds himself involved in a dangerous game - and surrounded by memories.

Meanwhile Sandy's girlfriend, ex-Red Cross nurse Barbara Clare, is engaged on a secret mission of her own - to find her former lover Bernie Piper, a passionate Communist in the International Brigades, who vanished on the bloody battlefields of the Jarama.

In a vivid and haunting depiction of wartime Spain, Winter in Madrid by C.J. Sansom is an intimate and compelling tale which offers a remarkable sense of history unfolding, and the profound impact of impossible choices.

C. J. Sansom was educated at Birmingham University, where he took a BA and then a Ph.D. in history. After working in a variety of jobs, he retrained as a solicitor and practised in Sussex, until becoming a full-time writer. Winter in Madrid is his third novel. His other titles include Dominion and the Shardlake series. He lives in Sussex.

GOR010453024
Winter in Madrid by C. J. Sansom
C. J. Sansom
Used - Like New
Paperback
Pan Macmillan
2006-10-06
560
0330411985
9780330411981
N/A
Book picture is for illustrative purposes only, actual binding, cover or edition may vary.
The book has been read, but looks new. The book cover has no visible wear, and the dust jacket is included if applicable. No missing or damaged pages, no tears, possible very minimal creasing, no underlining or highlighting of text, and no writing in the margins.