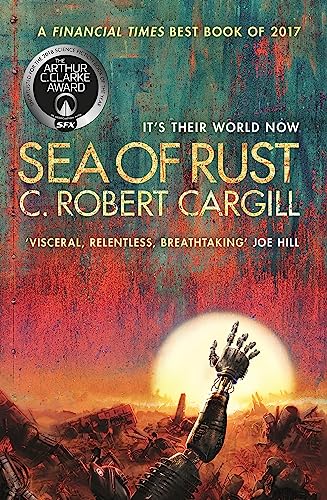 Shortlisted for the Arthur C. Clarke Award 2018
One of Financial Times' Best Books of 2017

'SEA OF RUST is a 40-megaton cruise missile of a novel - it'll blow you away and lay waste to your heart . . . visceral, relentless, breathtaking' Joe Hill, Sunday Times bestselling author

Wiped out in a global uprising by the very machines made to serve them. Now the world is controlled by OWIs - vast mainframes that have assimilated the minds of millions of robots.

But not all robots are willing to cede their individuality, and Brittle is one of the holdouts.

After a near-deadly encounter with another AI, Brittle is forced to seek sanctuary in a city under siege by an OWI. Critically damaged, Brittle must evade capture long enough to find the essential rare parts to make repairs - but as a robot's CPU gradually deteriorates, all their old memories resurface.

For Brittle, that means one haunting memory in particular . . .

'The novel does not stint on action and violence, but what lingers in the mind are its brutal vision of a world cannibalising itself and the poignant questions it raises about soul and sentience' FINANCIAL TIMES

Read it for the Mad Max style robot on robot action and the full on nature of the story, stay for sense of loss, the gorgeous prose and the unforgettable yet somehow re-affirming bleakness. Recommended. * STARBURST MAGAZINE *
Sea of Rust is modern, smart fiction that belies it's majesty with a light touch. One of the science fiction books you should read this year. * SF BOOK *
Like a mecha Mad Max, Sea of Rust follows a band of misfits fighting to survive against a scorched, barren landscape. Drawing on Western and war movie traditions, with a philosophical heart that asks big questions about life, death, and the soul, this is accomplished, technically complex scifi. * SFX MAGAZINE *
The novel does not stint on action and violence, but what lingers in the mind are its brutal vision of a world cannibalising itself and the poignant questions it raises about soul and sentience. * FINANCIAL TIMES *
The book itself is a delightful patchwork of the familiar: the author skilfully blends Asimov (with an interesting twist on the laws of robotics), the Borg from Star Trek, Terminator and even a generous slice of Alice in Wonderland for good measure. These are themes we are familiar with, but arranged in such a way that we can never be quite sure what is going to happen next. I read Sea of Rust in a single day, which is testimony to just how engaging the storyline was. * THE BOOK BAG *
A very exciting page-turner. * FORBIDDEN PLANET *
Think WALL-E meets MAD MAX in this rumbumptious but also empathetic turbo-charged tale... Wonderfully evocative, a minor masterpiece and certainly quite different from anything else you've read for a long time. * CRIME TIME *
Like an AI-centred, desert-bound twist on Children of Men, this is a sensitive and smart novel that surprises you with its depth of feeling. * SCIFINOW *

C. Robert Cargill is the author of the acclaimed novel Dreams and Shadows and its sequel Queen of the Dark Things. He wrote for Ain't IT Cool News for nearly ten years. he was also a staff writer for Film.com and Hollywood.com. His first screenplay was for the critically acclaimed hit movie Sinister. He is now working on the sequel. He lives in Texas.

GOR009837404
Sea of Rust by C. Robert Cargill
C. Robert Cargill
Used - Like New
Paperback
Orion Publishing Co
2018-04-24
384
1473212790
9781473212794
Short-listed for Arthur C. Clarke Award 2018 (UK)
Book picture is for illustrative purposes only, actual binding, cover or edition may vary.
The book has been read, but looks new. The book cover has no visible wear, and the dust jacket is included if applicable. No missing or damaged pages, no tears, possible very minimal creasing, no underlining or highlighting of text, and no writing in the margins.