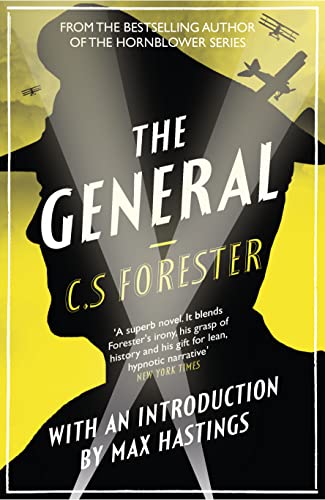 The General by C. S. Forester

The book John Kelly reads every time he gets a promotion to remind him of 'the perils of hubris, the pitfalls of patriotism and duty unaccompanied by critical thinking'

The most vivid, moving - and devastating - word-portrait of a World War One British commander ever written, here re-introduced by Max Hastings.

The General: The Classic WWI Tale of Leadership by C. S. Forester

The book John Kelly reads every time he gets a promotion to remind him of 'the perils of hubris, the pitfalls of patriotism and duty unaccompanied by critical thinking'

The most vivid, moving - and devastating - word-portrait of a World War One British commander ever written, here re-introduced by Max Hastings.

C.S. Forester's 1936 masterpiece follows Lt General Herbert Curzon, who fumbled a fortuitous early step on the path to glory in the Boer War. 1914 finds him an honourable, decent, brave and wholly unimaginative colonel. Survival through the early slaughters in which so many fellow-officers perished then brings him rapid promotion. By 1916, he is a general in command of 100,000 British soldiers, whom he leads through the horrors of the Somme and Passchendaele, a position for which he is entirely unsuited and intellectually unprepared.

Wonderfully human with Forester's droll relish for human folly on full display, this is the story of a man of his time who is anything but wicked, yet presides over appalling sacrifice and tragedy. In his awkwardness and his marriage to a Duke's unlovely, unhappy daughter, Curzon embodies Forester's full powers as a storyteller. His half-hero is patriotic, diligent, even courageous, driven by his sense of duty and refusal to yield to difficulties. But also powerfully damned is the same spirit which caused a hundred real-life British generals to serve as high priests at the bloodiest human sacrifice in the nation's history. A masterful and insightful study about the perils of hubris and unquestioning duty in leadership, The General is a fable for our times.

'A superb novel. It blends Forester's preference for military subjects and solid unreflective characters, his irony, his grasp of history and his gift for lean, hypnotic narrative' New York Times

'A portrait for all time of an individual in his period' H.G. Wells

C. S. Forester was born in Cairo in 1899. After studying medicine, he rose to fame with tales of naval warfare. On the outbreak of World War Two he worked for the British Ministry of Information in America writing propaganda. His most notable works were the twelve Horatio Hornblower books, depicting a Royal Navy officer during the Napoleonic era, and 'The African Queen'. His novels 'A Ship of the Line' and 'Flying Colours' were jointly awarded the 1938 James Tait Black Memorial Prize for fiction. He died in 1966.

Max Hastings is the author of several books, many about warfare. The most recent is the bestselling and critically acclaimed 'Catastrophe: Europe Goes to War 1914'. In his early career as a correspondent, he reported on the 1982 Falklands War, experiences which he described in his memoir 'Going to the Wars'. A fellow of the Royal Society of Literature and an Honorary Fellow of King's College London, he was knighted in 2002.

GOR006589052
9780007580071
000758007X
The General: The Classic WWI Tale of Leadership by C. S. Forester
C. S. Forester
Used - Like New
Paperback
HarperCollins Publishers
2015-02-26
320
N/A
Book picture is for illustrative purposes only, actual binding, cover or edition may vary.
The book has been read, but looks new. The book cover has no visible wear, and the dust jacket is included if applicable. No missing or damaged pages, no tears, possible very minimal creasing, no underlining or highlighting of text, and no writing in the margins
Trustpilot