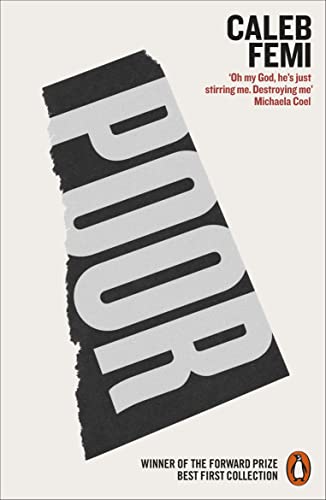 'Oh my God, he's just stirring me. Destroying me' Michaela Coel
'A poet of truth and rage, heartbreak and joy' Max Porter
'An urban romantic . . . powerful' Dazed & Confused
'It's simply stunning. Every image is a revelation' Terrance Hayes

What is it like to grow up in a place where the same police officer who told your primary school class they were special stops and searches you at 13 because 'you fit the description of a man' - and where it is possible to walk two and a half miles through an estate of 1,444 homes without ever touching the ground?

In Poor, Caleb Femi combines poetry and original photography to explore the trials, tribulations, dreams and joys of young Black boys in twenty-first century Peckham. He contemplates the ways in which they are informed by the built environment of concrete walls and gentrifying neighbourhoods that form their stage, writes a coded, near-mythical history of the personalities and sagas of his South London youth, and pays tribute to the rappers and artists who spoke to their lives.

Above all, this is a tribute to the world that shaped a poet, and to the people forging difficult lives and finding magic within it. As Femi writes in one of the final poems of this book: 'I have never loved anything the way I love the endz.'

I am reading a powerful book of poetry by a young man, Caleb Femi. Oh my God, he has a book called Poor and he's just stirring me. Destroying me. I look up to him as a poet -- Michaela Coel
Caleb Femi is a gift to us all from the storytelling gods. He is a poet of truth and rage, heartbreak and joy. But above all, this is love poetry. Love of community, language, music and form. This book flows from the fabric of boyhood to the politics and architecture of agony, from the material to the spiritual, always moving, always real. Poor is the heartbeat of a living city which truly knows itself. Caleb is a mighty and positive force in UK culture and this is a vital book -- Max Porter, author of Lanny
In this fabulous debut, concrete becomes a paradox of toughness and vulnerability, confinement and shelter . . . Caleb Femi's riveting photographs and compassionate yet hard-hitting lines map North Peckham's black boys and blocks . . . His depictions of young black men possess a brother's empathy . . . It's simply stunning. Every image is a revelation -- Terrance Hayes, author of American Sonnet for My Past and Future Assassin
Mesmerizing and transporting. I've never read a collection like this . . . I literally had to shake off the experience once I was finished. [This] incredible collection . . . gives voice to a London many would prefer to ignore . . . I don't think it possible for anyone to come away from this book without having developed new levels of empathy and compassion -- Derek Owusu, author of That Reminds Me
Impressive . . . At the heart of the collection is the poet's deconstruction of language, fusing biblical cadence with a contemporary street vernacular. There is something reminiscent of William Blake's visionary poetic in Femi's commitment to a realistic worship for places like Aylesbury Estate and North Peckham, as well as their communities . . . [recalls] Gwendolyn Brooks's and Nate Marshall's odes to Chicago . . . [Poor is] in conversation with Roger Robinson's and Jay Bernard's poems of witness and poetic gospel, which . . . create myths, legends, and folklore that render black bodies as holy -- Malika Booker, author of Pepper Seed
Caleb Femi's Poor bristles with the exhilarations and violences of boyhood and adolescence. In its interplay of image and text, of photographic image and poetic image, the book asks us to consider what is seen and unseen, spoken of and concealed; what is, in one of many numinous phrases, "proof of light". More than this, these are poems of witness, both noun and verb: poems of the self and what the self can bear -- Stephen Sexton, author of If All the World and Love Were Young
Giving a mythic resonance to communal life, the poems in Caleb Femi's Poor are vital, confronting and electric. Political, spiritual, formally inventive and energized by a music of protest and grief, this is a rare and anthemic debut -- Sean Hewitt, author of Tongues of Fire
An urban romantic . . . powerful * Dazed & Confused *
Caleb's talent calls for a global stage -- Virgil Abloh

Raised on the North Peckham estate in South London, Caleb Femi is a poet and director. He has written and directed short films for the BBC and Channel 4, and poems for Tate Modern, the Royal Society for Literature, St Paul's Cathedral, the BBC, the Guardian and more. He has been featured in the Dazed 100 list of the next generation shaping youth culture. From 2016 to 2018, he served as the Young People's Laureate for London. He recently wrote the liner material for Kano's 2019 album Hoodies All Summer. This is his first book.