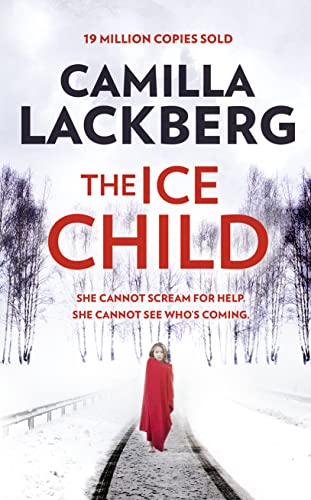 The Ice Child
by Camilla Lackberg

January, Fjallbacka. A semi-naked girl wanders through the woods in freezing cold weather. When she finally reaches the road, a car comes out of nowhere. It doesn't manage to stop.

By the time Detective Patrik Hedstroem receives word of the accident, the girl has already been identified. Four months ago she disappeared on her way home from the local riding school, and no one has seen her since. It quickly becomes clear that she has been subjected to unimaginably brutal treatment. And it's likely she's not the only one.

Meanwhile, Patrik's wife, crime writer Erica Falck, is looking into an old case - a family tragedy that led to a man's death. His wife was convicted of murder, but Erica senses that something isn't right. What is the woman hiding? As Erica digs deeper, the past starts to cast a shadow over the present and Patrik is forced to see his investigation in a whole new light.

`Pacy ... with flashing insight into the dark places of the psyche' Sunday Times

`Both chilling and thrilling' Sun

GOR007310650
The Ice Child (Patrik Hedstrom and Erica Falck, Book 9) by Camilla Lackberg
Camilla Lackberg
Patrik Hedstrom and Erica Falck
Used - Very Good
Hardback
HarperCollins Publishers
2016-03-10
432
0007518331
9780007518333
N/A
Book picture is for illustrative purposes only, actual binding, cover or edition may vary.
This is a used book - there is no escaping the fact it has been read by someone else and it will show signs of wear and previous use. Overall we expect it to be in very good condition, but if you are not entirely satisfied please get in touch with us.