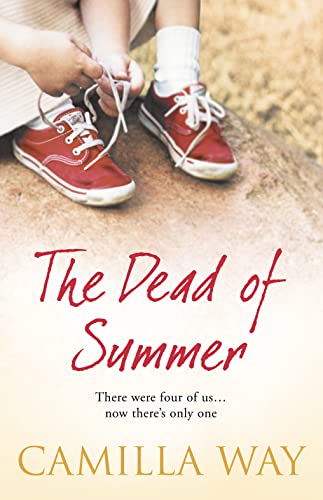 The Dead of Summer
by Camilla Way

IN ONE MOMENT THE HORROR BECOMES YOUR LIFE. IT'S NOT JUST IN THE PAPERS ANYMORE, IT'S ON YOUR HANDS.

The Dead of Summer Summary

The Dead of Summer by Camilla Way

IN ONE MOMENT THE HORROR BECOMES YOUR LIFE. IT'S NOT JUST IN THE PAPERS ANYMORE, IT'S ON YOUR HANDS.

Seven years ago when she was called Anita, Kyle and DEnis were her friends. They hadn't been at first, perhaps she shouldn't have pushed it, but Denis, bespectacled in thick NHS frames and Kyle, permanently clad in his anorak - were the only takers.

Let out of their south-London comprehensive they spent the long, sticky summer days smoking cigarettes, messing about in the Thames tunnels waiting for something to happen.

And then something did.

The Dead of Summer is a chilling and brilliant story that asks where evil lurks, and what form it takes.

The Dead of Summer Reviews

`A modern day classic in the making' Dazed & Confused

`So addictive you'll devour it in one greedy gulp' Cosmopolitan

'Prepare to be gripped by this brilliantly haunting novel' Grazia

'It's hard to say what's more impressive: Way's plot, Anita's utterly convincing voice or the evocation of the strange, eerie atmosphere. Whatever, it all adds up to something truly exciting - Way has just 'Got It'. The London Paper

Camilla Way was born in Greenwich, south-east London in 1973. Her father was the poet and author Peter Way. After attending Woolwich College she studied Modern English and French Literature at the University of Glamorgan. Formerly an editor on the men's style magazine Arena, Camilla Way is now a freelance writer. Having lived in Cardiff, Bristol, Bath and Clerkenwell, she now lives in south-east London.

GOR000410321
The Dead of Summer by Camilla Way
Camilla Way
Used - Very Good
Paperback
HarperCollins Publishers
2007-03-01
240
0007241720
9780007241729
Short-listed for YoungMinds Book Award 2007
Book picture is for illustrative purposes only, actual binding, cover or edition may vary.
This is a used book - there is no escaping the fact it has been read by someone else and it will show signs of wear and previous use. Overall we expect it to be in very good condition, but if you are not entirely satisfied please get in touch with us.