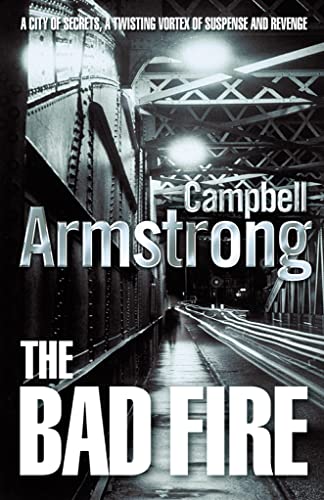 The Bad Fire
by Campbell Armstrong

A mystery, thriller and portrait of a vital city - Glasgow - The Bad Fire is Campbell Armstrong's finest novel since his unforgettable worldwide bestseller Jig.

The Bad Fire by Campbell Armstrong

A mystery, thriller and portrait of a vital city - Glasgow - The Bad Fire is Campbell Armstrong's finest novel since his unforgettable worldwide bestseller Jig.

Eddie Mallon has grown away from his roots, and away from the city of Glasgow. Eddie was just a child when his family fractured down the middle. He went to America with his mother; his sister Joyce stayed in Glasgow with their father, the charming, violent, mercurial Jackie Mallon.

Now Jackie has been murdered and the son he didn't know is coming home for the funeral. Try as he might, Eddie cannot resist pushing beyond the bland front presented by the local investigators. And when he does, he finds himself spiralling into the mysteries of the past as well as the present.

The Bad Fire is the place where children are told they will go if they commit a sin. Eddie is about to find out that even after all these years, the fire never goes out.

Lyrical, elegiac, suspenseful and thrilling, The Bad Fire is populated by a cast of superbly drawn individuals, with the city of Glasgow a brilliantly evoked character in its own right.

`Armstrong is a wonderfully atmospheric writer who shines a light into the dark corners of the human heart.' Sunday Telegraph

`He not only has a whiplash style, he also has a gift for understanding character, and his dialogue rings true.' New York Times

`Armstrong is among the most intriguing of blockbuster writers... near to unputdownable' GQ

`Armstrong has discovered a way with words that raises him above the routine level of the marketplace.' The Times

Campbell Armstrong was born in Glasgow in 1944 and educated at Sussex University. After living in the USA for twenty years, he now lives in Ireland. He has been in the front rank of modern thriller writers for many years, and his bestselling novels include the highly acclaimed Jig series.

GOR003914622
The Bad Fire by Campbell Armstrong
Campbell Armstrong
Used - Very Good
Hardback
HarperCollins Publishers
2001-05-21
480
0007117566
9780007117567
N/A
Book picture is for illustrative purposes only, actual binding, cover or edition may vary.
This is a used book - there is no escaping the fact it has been read by someone else and it will show signs of wear and previous use. Overall we expect it to be in very good condition, but if you are not entirely satisfied please get in touch with us.