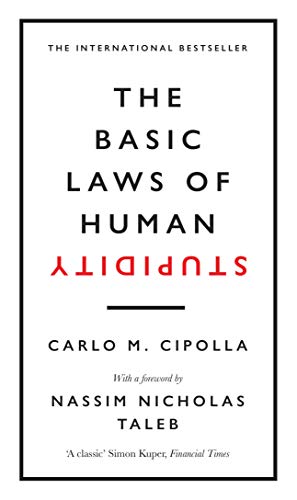 The Basic Laws of Human Stupidity
by Carlo M. Cipolla

The Basic Laws of Human Stupidity: The International Bestseller by Carlo M. Cipolla

'This is brilliant' - James O'Brien, author of How to be Right

The five laws that confirm our worst fears: stupid people can and do rule the world.

Since time immemorial, a powerful dark force has hindered the growth of human welfare and happiness. It is more powerful than the Mafia or the military. It has global catastrophic effects and can be found anywhere from the world's most powerful boardrooms to your local pub. This is the immensely powerful force of human stupidity.

Seeing the shambolic state of human affairs, and sensing the dark force at work behind it, Carlo M. Cipolla, the late, noted professor of economic history at the University of California, Berkeley, created a vitally important economic model that would allow us to detect, know and neutralise this threat: The Basic Laws of Human Stupidity.

If you've ever found yourself despairing at the ubiquity of stupidity among even the most 'intellectual' of people, then this hilarious, timely and slightly alarming little book is for you. Arm yourself in the face of baffling political realities, unreasonable colleagues or the unbridled misery of dinner with the in-laws with the first and only economic model for stupidity.

A classic * Simon Kuper, Financial Times *
This is brilliant. * James O'Brien, author of How to be Right *
A masterly book * Nassim Nicholas Taleb *
This is a very funny book, but Carlo Cipolla's underlying insight really matters: there's a lot of stupidity about, including in society's highest circles - and the stupid wield a surprising amount of power, because the rest of us can never guess what idiotic thing they'll do next. We need to get wise to stupidity, and Cipolla's drily witty rules are a great place to start. * Oliver Burkeman *
Cipolla's subtle tongue-in-cheek humour made this book an underground classic in Italy. Today, under current worldwide political trends, it reads more like black humour. Keep in mind: reliable statistical data shows that 98% of the people seriously believe that they are far less stupid than the average. * Carlo Rovelli, author of Seven Brief Lessons on Physics *

Carlo M. Cipolla (1922 - 2000) was an Italian economic historian, Fulbright Fellow and professor at the University of California, Berkeley. Cipolla was elected as a Corresponding Fellow of the British Academy in 1989 and awarded the International Balzan Prize for Economic History in 1995. He also held honorary degrees in Italy and Switzerland.

His classic treatise The Basic Laws of Human Stupidity was first published in 1988 and has sold more than half a million copies worldwide in over ten languages.

GOR010183332
The Basic Laws of Human Stupidity: The International Bestseller by Carlo M. Cipolla
Carlo M. Cipolla
Used - Very Good
Hardback
Ebury Publishing
2019-10-24
96
0753554836
9780753554838
N/A
Book picture is for illustrative purposes only, actual binding, cover or edition may vary.
This is a used book - there is no escaping the fact it has been read by someone else and it will show signs of wear and previous use. Overall we expect it to be in very good condition, but if you are not entirely satisfied please get in touch with us.