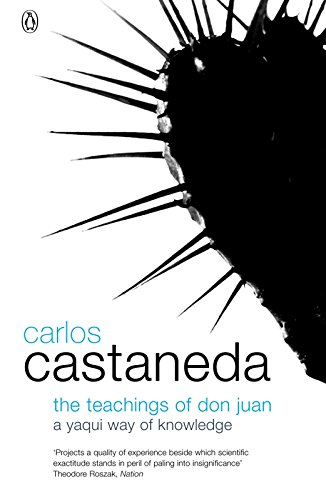 The Teachings of Don Juan
by Carlos Castaneda

In Stock
£7.49
First book in the "Don Juan" series. The author meets Don Juan and is introduced to his magical world and philosophy by means of hallucinogenic plants and special exercises.
Very Good Well Read
Only 2 left

The Teachings of Don Juan Summary

The Teachings of Don Juan: A Yaqui Way of Knowledge by Carlos Castaneda

Rethink your view of the world with The Teachings of Don Juan, the first book in Carlos Castaneda's spiritual journey into the world of sorcery...

The Teachings of don Juan is the story of Carlos Castaneda's extraordinary experiences.

In 1960 Carlos Castaneda was a graduate student when he met Don Juan, a Yaqui Indian feared and shunned by the ordinary folk of the American Southwest because of his unnatural powers. During the next five years don Juan's arcana knowledge led Castaneda into a world of beauty and terror, ruled by concepts far beyond those of Western civilisation.

Using medicinal herbs Castaneda lived through encounters with disembodied spirits, shamans in the form of huge wolves, and death in the shape of silver crows. Finally, after a night of utter terror in which he knew that his life was threatened by forces which he still cannot fully explain, he gave up his struggle to become a 'Man Of Knowledge'.

'It gives a different view of the world and challenges the ideas and beliefs that we have be taught, whilst also providing simple methods to changing the way we interact with the world on a day to day basis.' - 5* Reader Review

The Teachings of Don Juan Reviews

"It's impossible to view the world in quite the same way after reading him. . . . If Castaneda is correct, there is another world, a sometimes beautiful and sometimes frightening world, right before our eyes at this moment--if only we could see."--"Chicago Tribune

Carlos Castaneda was a graduate student in anthropology at the University of California, Los Angeles, gathering information on various medicinal herbs used by the Indians in Sonora, Mexico, when he met the old Yaqui Indian, Don Juan. His first book, The Teachings of don Juan, was the story of the first period the two men spent together as master and pupil. This was followed by the other volumes in the series, A Separate Reality, Journey to Ixtlan, Tales of Power, The Second Ring of Power and The Eagle's Gift, all of which are published by Penguin. He also wrote the Art of Dreaming (1993).

Carlos Castaneda died in 1998. In its obituary for him the Guardian wrote 'It is hard to find a New Age celebrity who won't admit to having been influenced by Castaneda's powerful prose and paradigm-busting philosophy ... Few critics would deny author Joyce Carol Oates's assessment of his books as "remarkable works of art"'

GOR001198214
The Teachings of Don Juan: A Yaqui Way of Knowledge by Carlos Castaneda
Carlos Castaneda
Used - Very Good
Paperback
Penguin Books Ltd
1990-02-22
256
0140192387
9780140192384
N/A
Book picture is for illustrative purposes only, actual binding, cover or edition may vary.
This is a used book - there is no escaping the fact it has been read by someone else and it will show signs of wear and previous use. Overall we expect it to be in very good condition, but if you are not entirely satisfied please get in touch with us.