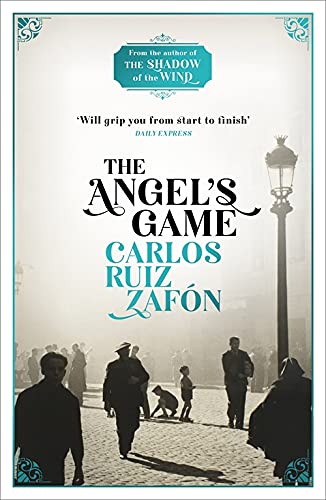 In Stock
£4.49
The stunning new novel from the internationally bestselling author of THE SHADOW OF THE WIND.
Like New Very Good Good Well Read
Only 3 left

The Angel's Game: The Cemetery of Forgotten Books 2 by Carlos Ruiz Zafon

The stunning new novel from the internationally bestselling author of THE SHADOW OF THE WIND.

In an abandoned mansion at the heart of Barcelona, a young man - David Martin - makes his living by writing sensationalist novels under a pseudonym. The survivor of a troubled childhood, he has taken refuge in the world of books, and spends his nights spinning baroque tales about the city's underworld. But perhaps his dark imaginings are not as strange as they seem, for in a locked room deep within the house letters hinting at the mysterious death of the previous owner. Like a slow poison, the history of the place seeps into his bones as he struggles with an impossible love.

Then David receives the offer of a lifetime: he is to write a book with the power to change hearts and minds. In return, he will receive a fortune, perhaps more. But as David begins the work, he realises that there is a connection between this haunting book and the shadows that surround his home...

The Angel's Game weaves the conventions of Wilkie Collins and Dickens into something original and surprisingly moving. -- Stephanie Merritt * OBSERVER *
'Beyond plentiful shocks and thrills, Zafon niftily treads the fine line between a story of paranormal events and one of psychological delusion.' -- Boyd Tonkin * INDEPENDENT *
This is a gothic, page-turning, supernatural thriller...there is plenty here to keep Zafon fans happy. * PRESS ASSOCIATION *

CARLOS RUIZ ZAFON is the author of eight novels, including the internationally bestselling and critically acclaimed Cemetery of Forgotten Books series: THE SHADOW OF THE WIND, THE ANGEL'S GAME, THE PRISONER OF HEAVEN and THE LABYRINTH OF THE SPIRITS. His work, which also includes prizewinning young adult novels, has been translated into more than fifty languages and published around the world, garnering numerous awards and reaching millions of readers. He lives in Los Angeles.

GOR010401021
The Angel's Game: The Cemetery of Forgotten Books 2 by Carlos Ruiz Zafon
Carlos Ruiz Zafon
Used - Like New
Paperback
Orion Publishing Co
2010-04-29
544
0753826496
9780753826492
Long-listed for IMPAC Dublin Literary Award 2010 (UK)
Book picture is for illustrative purposes only, actual binding, cover or edition may vary.
This is a used book - there is no escaping the fact it has been read by someone else and it will show signs of wear and previous use. Overall we expect it to be in very good condition, but if you are not entirely satisfied please get in touch with us.