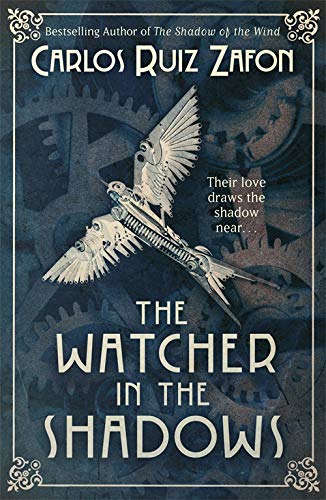 The Watcher in the Shadows
by Carlos Ruiz Zafon

The Watcher in the Shadows Summary

The Watcher in the Shadows by Carlos Ruiz Zafon

A mysterious toymaker who lives as a recluse in an old mansion, surrounded by the mechanical beings he has created... an enigma surrounding strange lights that shine through the mists that envelop the small island on which the old lighthouse stands... a shadowy creature that hides deep in the woods... these are the elements of a mystery that bind 14-year-old Irene to Ismael during one magical summer spent in the Blue Bay. Irene's mother has taken a job as a housekeeper for the toymaker, Lazarus, but his house contains more secrets than Irene and Ishmael have bargained for.

Customer Reviews - The Watcher in the Shadows

The Watcher in the Shadows Reviews

A pleasingly old-fashioned chiller, set in Normandy just before the second world war. Irene goes to stay in the Blue Bay when her mother becomes housekeeper to toymaker Lazarus Jann. A mystery filled with creepy automata and deadly secrets. -- Summer Books Guide * FT.COM *
Very well-written, and full of suspense, it has all the appeal of an ancient story-book, with black and white line-drawings at the start of every chapter. -- Alison A.Maxwell-Cox * THE SCHOOL LIBRARIAN *

CARLOS RUIZ ZAFON is the author of eight novels, including the internationally bestselling and critically acclaimed Cemetery of Forgotten Books series: THE SHADOW OF THE WIND, THE ANGEL'S GAME, THE PRISONER OF HEAVEN and THE LABYRINTH OF THE SPIRITS. His work, which also includes prizewinning young adult novels, has been translated into more than fifty languages and published around the world, garnering numerous awards and reaching millions of readers. He lives in Los Angeles.

GOR006156245
The Watcher in the Shadows by Carlos Ruiz Zafon
Carlos Ruiz Zafon
Used - Very Good
Paperback
Orion Publishing Co
2014-10-09
256
0753829258
9780753829257
N/A
Book picture is for illustrative purposes only, actual binding, cover or edition may vary.
This is a used book - there is no escaping the fact it has been read by someone else and it will show signs of wear and previous use. Overall we expect it to be in very good condition, but if you are not entirely satisfied please get in touch with us.