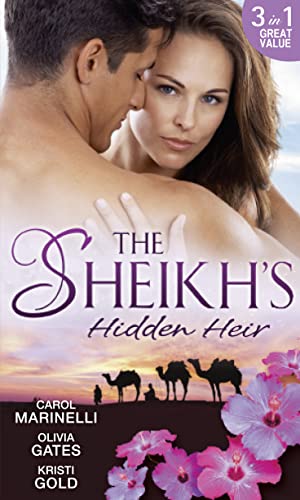 Volume two of a fabulous four-volume collection of twelve romances by some of our bestselling Modern authors. Sexy sheikhs, beautiful women and all the opulence and heat of the desert. A truly luxurious collection.

The Sheikh's Hidden Heir: Secret Sheikh, Secret Baby / The Sheikh's Claim / The Return of the Sheikh by Carol Marinelli

Volume two of a fabulous four-volume collection of twelve romances by some of our bestselling Modern authors. Sexy sheikhs, beautiful women and all the opulence and heat of the desert. A truly luxurious collection.

Hot-shot surgeon Karim Zaraq has always kept his identity secret: he's the prince of a desert kingdom! So when one night with pretty midwife Felicity Anderson leads to unexpected consequences, Karim is determined to make her his bride...if only he can convince her to say `I do'!

When their tempestuous relationship crashed and burned Lujayn Morgan left Prince Jalal Aal Shalaan and married another man. Yet after her husband died, Jalal and Lujayn indulged in one last night of passion. Two years later, Jalal discovers that Lujayn has been keeping a secret...his heir!

The Return of the Sheikh

Carol Marinelli recently filled in a form asking for her job title. Thrilled to be able to put down her answer, she put writer. Then it asked what Carol did for relaxation and she put down the truth - writing. The third question asked for her hobbies. Well, not wanting to look obsessed she crossed the fingers on her hand and answered swimming but, given that the chlorine in the pool does terrible things to her highlights - I'm sure you can guess the real answer. USA TODAY Bestselling author Olivia Gates has published over thirty books in contemporary, action/adventure and paranormal romance. And whether in today's world or the others she creates, she writes larger than life heroes and heroines worthy of them, the only ones who'll bring those sheikhs, princes, billionaires or gods to their knees. She loves to hear from readers at oliviagates@gmail.com or on facebook.com/oliviagatesauthor, Twitter @Oliviagates. For her latest news visit oliviagates.com Since her first venture into novel writing in the mid-nineties, Kristi Gold has greatly enjoyed weaving stories of love and commitment. She's an avid fan of baseball, beaches and bridal reality shows. During her career, Kristi has been a National Readers Choice winner, Romantic Times award winner, and a three-time Romance Writers of America RITA finalist. She resides in Central Texas and can be reached through her website at http://kristigold.com.
GOR007279570
9780263918403
0263918408
The Sheikh's Hidden Heir: Secret Sheikh, Secret Baby / The Sheikh's Claim / The Return of the Sheikh by Carol Marinelli
Carol Marinelli
Used - Very Good
Paperback
HarperCollins Publishers
2016-01-14
560
N/A
Book picture is for illustrative purposes only, actual binding, cover or edition may vary.
This is a used book - there is no escaping the fact it has been read by someone else and it will show signs of wear and previous use. Overall we expect it to be in very good condition, but if you are not entirely satisfied please get in touch with us
Trustpilot