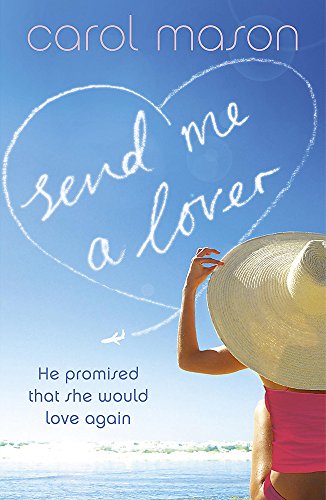 Send Me A Lover
by Carol Mason

In Stock
£3.99
Carol Mason's sexy, modern, thoughtful novels will appeal to women of all ages
Very Good
Only 3 left

Send Me A Lover Summary

Send Me A Lover by Carol Mason

We love. We lose. And sometimes we love again...

Back when neither could have imagined what lay ahead, Angela's husband Jonathan made her a promise - that if he died before she did, he would see to it that she wasn't on her own. He would send her someone to love.

Now two years have passed since Jonathan's sudden death, but the pain of losing him is as sharp as ever. Feeling cut adrift in his native Canada, Angela whisks her vivacious mother off to a Greek island, thinking a holiday might be just the prescription she needs. But being with your mum who's afraid of dying, when you yourself are afraid of living, is hardly the formula for a laid-back week in the sun.

It's only when Angela meets two very different men who seem to have the uncanny ability of seeing right into her soul, that she starts to think about Jonathan's promise to her. Can something magical be happening? Is one of these men the lover her husband has sent for her?

Send Me A Lover Reviews

This cross between Mamma Mia! and Celia Aherne's PS I Love You is fast and furious chick-lit * Red magazine *
a writer of compelling insight, with a gritty yet humorous edge * Daily Mirror *
Set in Newcastle, there is a fresh and vital edge to this superior debut novel... A bittersweet narrative and ambiguous outcomes make this much grittier and more substantial than standard chick-lit fare. * Financial Times on THE SECRETS OF MARRIED WOMEN *
An eye-opener to those of us unmarrieds who see the grass as greener on the other side... Realistic and entertaining. * New Books on THE SECRETS OF MARRIED WOMEN *
There's a big buzz around this tale of three Newcastle wives tempted to cheat on their husbands and I can see why * Eve on THE SECRETS OF MARRIED WOMEN *
This intriguing second novel from Carol Mason is a beautiful story about coming to terms with loss * Yorkshire Evening Post *

Carol Mason was born, and grew up, in the North-East of England. As a teenager she was crowned Britain`s National Smile Princess and since became a model, diplomat, hotel receptionist, waitress, and advertising copywriter. She lives in Canada with her husband, Tony.

GOR000830996
Send Me A Lover by Carol Mason
Carol Mason
Used - Very Good
Paperback
Hodder & Stoughton General Division
2008-11-13
320
0340932775
9780340932773
N/A
Book picture is for illustrative purposes only, actual binding, cover or edition may vary.
This is a used book - there is no escaping the fact it has been read by someone else and it will show signs of wear and previous use. Overall we expect it to be in very good condition, but if you are not entirely satisfied please get in touch with us.