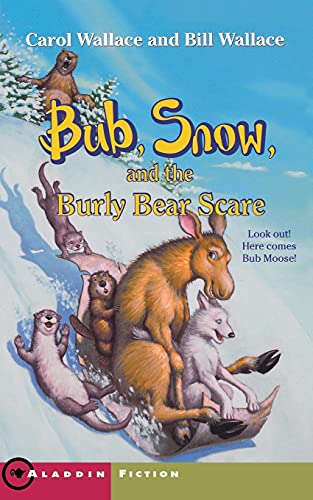 Bub, Snow, and the Burly Bear Scare
by Carol Wallace

In Stock
£5.99
In this sequel to "Bub Moose," Bub, Snow, and all their woodland friends have more funny adventures in their forest home. Illustrations.
Very Good
Only 3 left

Bub, Snow, and the Burly Bear Scare by Carol Wallace

"Don't ever run from a mountain lion."

Mother also warned me about people. But she didn't know Jane and Jussy, the children who left us hay when we were so hungry. I may be a little moose, but I'm no dummy. That hay was sooo good....
After our dangerous journey over the mountains, everything here seemed wonderful. I made friends with Raney and Sweet Pea, draft horses on the farm, and Chippy the beaver. I even found my old pal, Snow the wolf. Everything was perfect. Until we met Burly!
A grizzly with insomnia, Burly was about the nastiest, scariest character I ever met. All I wanted to do was stay away from him. But when he went after my friends...well, what's a moose to do?

Bill Wallace grew up in Oklahoma. Along with riding their horses, he and his friends enjoyed campouts and fishing trips. Toasting marshmallows, telling ghost stories to scare one another, and catching fish was always fun. One of the most memorable trips took place on the far side of Lake Lawtonka, at the base of Mt. Scott. He and his best friend, Gary, spent the day shooting shad with bow and arrows, cutting bank poles, and getting ready to go when their dads got home from work. Although there was no "monster" in Lake Lawtonka, one night there was a "sneak attack" by a rather large catfish tail. Checking the bank poles was not nearly as fun or "free" after that point, but it was the inspiration for this story. Bill Wallace has won nineteen children's state awards and been awarded the Arrell Gibson Lifetime Achievement Award for Children's Literature from the Oklahoma Center for the Book.

GOR009951013
Bub, Snow, and the Burly Bear Scare by Carol Wallace
Carol Wallace
Used - Very Good
Paperback
Simon & Schuster
2003-10-01
128
0743406400
9780743406406
N/A
Book picture is for illustrative purposes only, actual binding, cover or edition may vary.
This is a used book - there is no escaping the fact it has been read by someone else and it will show signs of wear and previous use. Overall we expect it to be in very good condition, but if you are not entirely satisfied please get in touch with us.