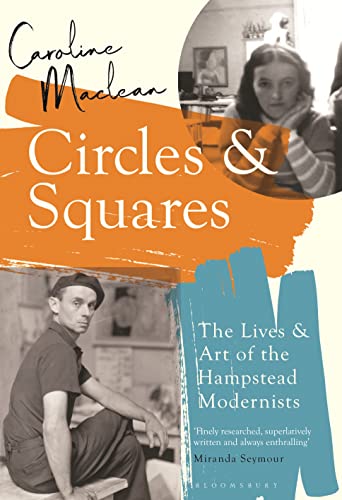 Circles and Squares
by Caroline Maclean

Circles and Squares: The Lives and Art of the Hampstead Modernists by Caroline Maclean

'Bloomsbury's dead. Long live Hampstead' Daily Telegraph 'Riveting ... [The book] fizzes with the creative energy of the times - Maclean is the perfect biographer' Financial Times 'From Bauhaus to bohemian love ... the intricate lives and art of interwar modernists are captured in this hugely enjoyable and well-plotted book' Guardian A spellbinding portrait of the Hampstead Modernists, threading together the lives, loves, rivalries and ambitions of a group of artists at the heart of an international avant-garde. Hampstead in the 1930s. In this peaceful, verdant London suburb, Barbara Hepworth and Ben Nicholson have embarked on a love affair - a passion that will launch an era-defining art movement. In her chronicle of the exhilarating rise and fall of British Modernism, Caroline Maclean captures the dazzling circle drawn into Hepworth and Nicholson's wake: among them Henry Moore, Paul Nash, Herbert Read, and famed emigres Walter Gropius, founder of the Bauhaus, and Piet Mondrian, blown in on the winds of change sweeping across Europe. Living and working within a few streets of their Parkhill Road studios, the artists form Unit One, a cornerstone of the Modernist movement which would bring them international renown. Drawing on previously unpublished archive material, Caroline Maclean's electrifying Circles and Squares brings the work, loves and rivalries of the Hampstead Modernists to life as never before, capturing a brief moment in time when a new way of living seemed possible. United in their belief in art's power to change the world, her cast of trailblazers radiate hope and ambition during one of the darkest chapters of the twentieth century. '[The book evokes] a sense of an era in which it was bliss to be alive, and in love, and bursting with creativity and the possibilities of making life and art in new ways' Literary Review 'Caroline Maclean explores this forgotten interlude as if travelling, supping tea, from door to door ... [An] impeccably researched social history' The i paper

Caroline Maclean has given us a finely researched, superlatively written and always enthralling account of the private lives and entangled love affairs of a group of artists who changed the face of British art - and whose ideas about architecture speak to us as urgently as ever. A wonderful book -- Miranda Seymour
From Bauhaus to bohemian love ... the intricate lives and art of interwar modernists are captured in this hugely enjoyable and well-plotted book ... Circles and Squares is a skilful work of synthesis * Guardian *
A fascinating, extremely moving account of an attempt at communal living right in the heart of London. So many of the major artists of the twentieth century are here. Questions of how to live and how to make art jostle together and there's much to inspire and challenge us now -- Lara Feigel
In this engrossing, superbly written biography, Caroline Maclean explores the vanished world of the Hampstead Modernists of the 1930s. Her cast list reads like a "who's who" of the pre-war British art world -- Huston Gilmore * Daily Mirror *
Bloomsbury's dead. Long live Hampstead ... Maclean brings this charged decade, in which a slice of London bohemia debated endlessly how best to live and love, and shook British art from its stupor in the process, to glowing life ... She recreates beautifully the strange mix of buoyancy and instability that characterised the decade * Daily Telegraph *
Full of entertaining snapshots ... Maclean does much to recreate the atmosphere of Hampstead. One wants very much to be there -- Laura Freeman * The Times *
As a tale of journeys both geographical and emotional, and relationships that withstood conflicting ideals and frequent rearrangements, the book is captivating and wide-reaching ... Caroline Maclean's enthusiastic, even breathless, canter through British art in the 1930s shows us where this country was once almost at the vanguard -- Marina Vaizey * The Arts Desk *
Caroline Maclean's breezy account of Hampstead in the 1930s offers abundant evidence that the area really was a hotbed of new ideas, new forms and new ways of living ... [The book evokes] a sense of an era in which it was bliss to be alive, and in love, and bursting with creativity and the possibilities of making life and art in new ways * Literary Review *
[A] riveting group biography of artists, architects and writers flourishing in England during the 1930s ... [The book] fizzes with the creative energy of the times - and is refreshingly short on sentiment ... Maclean is the perfect biographer - self-effacing, non-judgmental, unobtrusive -- Catherine Taylor * Financial Times *
As an introduction to 1930s modernism, Circles and Squares is terrific * Sunday Times *
[An] impeccably researched social history -- Hettie Judah * The i Paper *
This is a story of brave and sometimes brilliant souls defying convention to live and work as they wish -- Rowan Moore * Observer *

Caroline Maclean studied English and History of Art at Oxford University before completing her PhD at the University of London. She worked in film and television and lived in New York and Boston before moving back to London where she combines writing with teaching. She has written for the London Review of Books and the Times Literary Supplement

GOR010617806
Circles and Squares: The Lives and Art of the Hampstead Modernists by Caroline Maclean
Caroline Maclean
Used - Very Good
Hardback
Bloomsbury Publishing PLC
2020-04-30
320
1408889692
9781408889695
N/A
Book picture is for illustrative purposes only, actual binding, cover or edition may vary.
This is a used book - there is no escaping the fact it has been read by someone else and it will show signs of wear and previous use. Overall we expect it to be in very good condition, but if you are not entirely satisfied please get in touch with us.