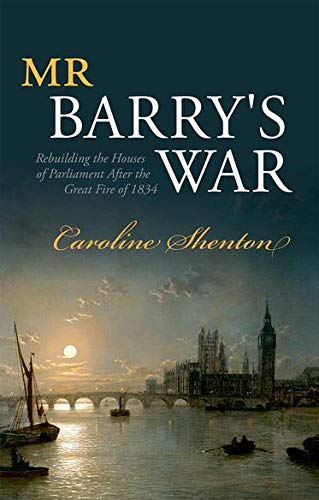 In Stock
£11.99
The saga of the epic battle to re-build the Houses of Parliament after the great fire of 1834, this is also the story of how the greatest construction programme in Britain for centuries produced one of the most famous and instantly recognizable buildings ever built
Very Good
Only 1 left

Mr Barry's War: Rebuilding the Houses of Parliament after the Great Fire of 1834 by Caroline Shenton (Director of the Parliamentary Archives)

When the brilliant classical architect Charles Barry won the competition to build a new, Gothic, Houses of Parliament in London he thought it was the chance of a lifetime. It swiftly turned into the most nightmarish building programme of the century. From the beginning, its design, construction and decoration were a battlefield. The practical and political forces ranged against him were immense. The new Palace of Westminster had to be built on acres of unstable quicksand, while the Lords and Commons carried on their work as usual. Its river frontage, a quarter of a mile long, needed to be constructed in the treacherous currents of the Thames. Its towers were so gigantic they required feats of civil engineering and building technology never used before. And the interior demanded spectacular new Gothic features not seen since the middle ages. Rallying the genius of his collaborator Pugin; flanking the mad schemes of a host of crackpot inventors, ignorant busybodies and hostile politicians; attacking strikes, sewage and cholera; charging forward three times over budget and massively behind schedule, it took twenty-five years for Barry to achieve victory with his 'Great Work' in the face of overwhelming odds, and at great personal cost. Mr Barry's War takes up where its prize-winning prequel The Day Parliament Burned Down left off, telling the story of how the greatest building programme in Britain for centuries produced the world's most famous secular cathedral to democracy.

A very worthwhile addition to the bookshelves of aficionados of Victorian design and architecture. * Chris Pond, Context *
a real jewel, finely wrought and beautiful, just like the Palace of Westminster it describes. * Lucy Worsley, Books of the Year 2016, BBC History Magazine *
vividly written ... an authoritative and lively account of the political and artistic machinations involved in the creation of one of the capital's most familiar landmarks. * Ian Critchley, Sunday Times *
not only a fascinating read but a timely one, too * Tony Rennell, Daily Mail *
If Shenton's first book was like a grotesque Gothic novel, this is an epic, with a hero at its heart. * William Whyte, Literary Review *
Shenton seeks [...] to correct the historical record and succeeds definitively * Rosemary Hill, Times Literary Supplement *
This is a wonderful tale, brilliantly told. I shan't ever look at the Houses of Parliament quite the same again and can't wait to visit soon with new knowledge from this exceptional book. * Mike Paterson, London Historians *
Shenton brilliantly outlines how from conception to completion, the design and construction of the new Palace of Westminster were a fearsome battleground ... [Parliamentary] colleagues who want to consider the current options and challenges should read Caroline Shenton's Mr Barry's War. * Keith Simpson, Total Politics *

About Caroline Shenton (Director of the Parliamentary Archives)

Caroline Shenton was Director of the Parliamentary Archives at Westminster from 2008 to 2014, and prior to that was a senior archivist at Parliament and The National Archives at Kew. Her first book, The Day Parliament Burned Down, won the inaugural Political Book of the Year Award in 2013. It was also shortlisted for a number of other prizes, including the Longman-History Today Prize, and was a Book of the Year for the Daily Telegraph, New Statesman, Daily Mail, and Herald Scotland. This is its sequel.

GOR008226444
Mr Barry's War: Rebuilding the Houses of Parliament after the Great Fire of 1834 by Caroline Shenton (Director of the Parliamentary Archives)
Caroline Shenton (Director of the Parliamentary Archives)
Used - Very Good
Hardback
Oxford University Press
2016-09-22
304
0198707193
9780198707196
N/A
Book picture is for illustrative purposes only, actual binding, cover or edition may vary.
This is a used book - there is no escaping the fact it has been read by someone else and it will show signs of wear and previous use. Overall we expect it to be in very good condition, but if you are not entirely satisfied please get in touch with us.