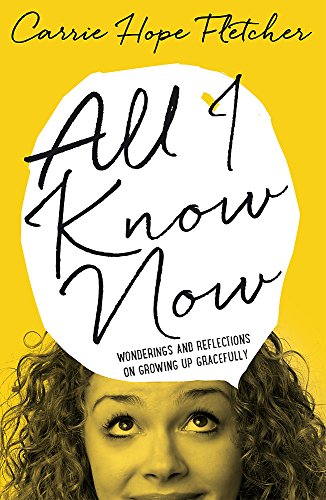 All I Know Now
by Carrie Hope Fletcher

In Stock
£29.99
The essential guide to navigating the 'teen age' by YouTube sensation Carrie Hope Fletcher
Very Good
Only 1 left

All I Know Now Summary

All I Know Now: Wonderings and Reflections on Growing Up Gracefully by Carrie Hope Fletcher

We all know that growing up is hard to do, and sometimes the only thing that makes it better are the reassuring words of someone who has walked that bumpy road just a few steps ahead of you and somehow ended up as a fully-functioning adult. Carrie Hope Fletcher is that person.* Thanks to her phenomenally popular YouTube videos, Carrie has become an 'honorary big sister' to hundreds of thousands of young people who turn to her for advice, friendship and, most of all, the knowledge that things will get better.

Carrie has created a safe and positive space for young people to connect and share their hopes and concerns online, and now she will share her most personal thoughts and experiences in her first book, ALL I KNOW NOW. Part memoir, part advice guide, it will include Carrie's thoughts on some of the topics she's asked about most regularly: bullying, body image, relationships and perhaps the scariest question of all: what does the future hold for me? With warmth, wit and a sprinkling of hard-won wisdom, Carrie will provide the essential tools for growing up gracefully . . . most of the time.

*Although she did recently post a video about how to pee in a onesie. So the definition of 'adult' is a bit flexible here . . .

All I Know Now Reviews

Oh, what a fantastic book - so honest, so brilliant, so KIND. If every mum or dad buys this for their teenager they'll be doing themselves a real favour - everyone will benefit, I promise! * Jill Mansell, author of DON'T WANT TO MISS A THING *
Where was this book when I was growing up? Even with describing her mistakes and stumbles, Carrie's prose remains graceful and perfect. This is a best friend in book form * Andrew Kaufman, author of ALL MY FRIENDS ARE SUPERHEROES *
Young, fab and incredibly talented, I think I manage to keep my massive jealousy of Carrie Hope Fletcher just about under control :-) * Jenny Colgan, author of THE LITTLE BEACH STREET BAKERY *
All I Know Now . . . It's super mega awesome * Emma Blackery, youtube.com/emmablackery *
An honest and funny guide to growing, dreaming and being * Samantha Shannon, author of THE BONE SEASON *
Oh @CarrieHFletcher I am LOVING your book. You are wise beyond your years and you're a beautiful writer * Harriet Evans, author of A PLACE FOR US *
Full of warmth, wit and wisdom, [Carrie is] the big sister everyone needs in their life * Top of the Pops magazine *

Carrie Hope Fletcher is an actress, singer, author, vlogger and, thanks to her popular YouTube channel ItsWayPastMyBedTime, 'honorary big sister' to over a million young people around the world. In 2017, she won the public vote for Radio Times Online Champion of the year. Carrie's first book, All I Know Now, was a number one Sunday Times bestseller and her debut novel, On the Other Side, also went straight to number one in its first week on sale. Carrie's second novel, All That She Can See, was a Top Three Sunday Times bestseller in hardback. Carrie played the role of Eponine in Les Miserables at the Queen's Theatre in London's West End for almost three years and received the 2014 WhatsOnStage Award for Best Takeover in a Role. In 2016 she played Truly Scrumptious in a six-month run of Chitty Chitty Bang Bang, before landing the role of Wednesday Addams in the national UK theatre tour of The Addams Family musical in 2017. Carrie lives just outside of London with numerous fictional friends that she keeps on bookshelves, just in case.

GOR009937877
All I Know Now: Wonderings and Reflections on Growing Up Gracefully by Carrie Hope Fletcher
Carrie Hope Fletcher
Used - Very Good
Paperback
Little, Brown Book Group
2015-04-23
352
0751561797
9780751561791
N/A
Book picture is for illustrative purposes only, actual binding, cover or edition may vary.
This is a used book - there is no escaping the fact it has been read by someone else and it will show signs of wear and previous use. Overall we expect it to be in very good condition, but if you are not entirely satisfied please get in touch with us.