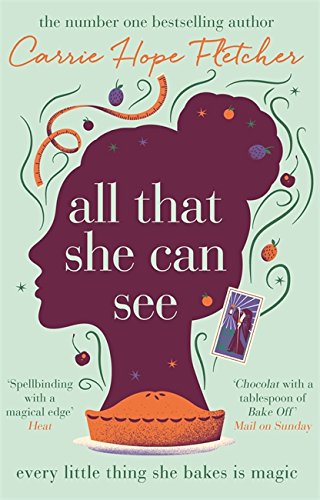 All That She Can See
by Carrie Hope Fletcher

The Top Three Sunday Times bestselling novel from Carrie Hope Fletcher, the star of The Addams Family musical! All That She Can See will be the most magical story you'll read all year!

All That She Can See Summary

All That She Can See: Every little thing she bakes is magic by Carrie Hope Fletcher

The Top Three Sunday Times bestselling novel from Carrie Hope Fletcher, the author of On the Other Side. A story of love, food and a little bit of magic, All That She Can See is an enchanting and beautiful novel that's guaranteed to be the most magical story you'll read all year.

Feelings are part of life - feelings are life. If you take away what people feel, you take away anything meaningful. Wanting to diminish the evil in this world is a good cause, one I have fought for the majority of my life, but not like this . . .

Cherry has a hidden talent. She can see things other people can't and she decided a long time ago to use this skill to help others. As far as the rest of the town is concerned she's simply the kind-hearted young woman who runs the local bakery, but in private she uses her gift to add something special to her cakes so that after just one mouthful the townspeople start to feel better about their lives. They don't know why they're drawn to Cherry's bakery - they just know that they're safe there and that's how Cherry likes it. She can help them in secret and no one will ever need to know the truth behind her gift.

And then Chase turns up and threatens to undo all the good Cherry has done. Because it turns out she's not the only one who can see what she sees . . .

Customer Reviews - All That She Can See

All That She Can See Reviews

Carrie played the role of Eponine in Les Miserables at the Queen's Theatre in London's West End for almost three years. She has since stared in and received awards for a number of productions including The War of the Worlds, The Addams Family, and Heathers: The Musical. Carrie will soon rejoin Les Miserables, this time playing Fantine, in a new concert version at the Gielgud Theatre.

Carrie lives just outside of London with numerous fictional friends that she keeps on bookshelves, just in case. Carrie's debut album, also called When the Curtain Falls, was released in 2018.

GOR009006337
All That She Can See: Every little thing she bakes is magic by Carrie Hope Fletcher
Carrie Hope Fletcher
Used - Like New
Paperback
Little, Brown Book Group
2018-01-25
384
075156320X
9780751563207
N/A
Book picture is for illustrative purposes only, actual binding, cover or edition may vary.
The book has been read, but looks new. The book cover has no visible wear, and the dust jacket is included if applicable. No missing or damaged pages, no tears, possible very minimal creasing, no underlining or highlighting of text, and no writing in the margins.