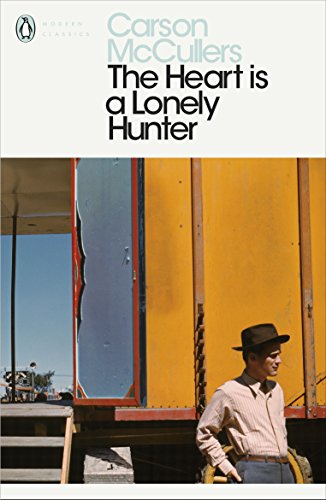 The Heart is a Lonely Hunter
by Carson McCullers

Used Price
5,19 £
New RRP 8,99 £
Free Shipping in the UK
A group of people have little in common except that they are all hopelessly lonely. A young girl, a drunken socialist and a black doctor are drawn to a gentle, sympathetic deaf mute, whose presence changes their lives.
Reviews:
Trustpilot
Like New Very Good Good Well Read

The Heart is a Lonely Hunter Summary

The Heart is a Lonely Hunter by Carson McCullers

'She has examined the heart of man with an understanding ... that no other writer can hope to surpass' Tennessee Williams

Often cited as one of the great novels of twentieth-century American fiction, Carson McCullers' prodigious first novel was published to instant acclaim when she was just twenty-three. Set in a small town in the middle of the deep South, it is the story of John Singer, a lonely deaf-mute, and a disparate group of people who are drawn towards his kind, sympathetic nature. The owner of the cafe where Singer eats every day, a young girl desperate to grow up, an angry socialist drunkard, a frustrated black doctor: each pours their heart out to Singer, their silent confidant, and he in turn changes their disenchanted lives in ways the could never imagine. Moving, sensitive and deeply humane, The Heart is a Lonely Hunter explores loneliness, the human need for understanding and the search for love.

Customer Reviews - The Heart is a Lonely Hunter

The Heart is a Lonely Hunter Reviews

The greatest prose writer that the South produced ... She has examined the heart of man with an understanding that no other writer can hope to surpass -- Tennessee Williams
A remarkable book ... [McCullers] writes with a sweep and certainty that are overwhelming * The New York Times *
Of all the Southern writers, she is the most apt to endure -- Gore Vidal
Again [McCullers] shows a sort of subterranean and ageless instinct for probing the hidden in men's hearts and minds * New York Herald-Tribune *

Carson McCullers was born in 1917. She is the critically acclaimed author of several popular novels in the 1940s and '50s, including The Member of the Wedding (1946). Her novels frequently depicted life in small towns of the southeastern United States and were marked by themes of loneliness and spiritual isolation. McCullers suffered from ill health most of her adult life, including a series of strokes that began when she was in her 20s; she died at the age of 50. The Member of the Wedding was dramatized for the stage in the 1950s and filmed in 1952 and 1997. Other films based on her books are Reflections in a Golden Eye (1967, with Elizabeth Taylor and Marlon Brando), The Heart is a Lonely Hunter (1968, starring Alan Arkin) and The Ballad of the Sad Cafe (1991).

GOR007376893
The Heart is a Lonely Hunter by Carson McCullers
Carson McCullers
Penguin Modern Classics
Used - Like New
Paperback
Penguin Books Ltd
2000-08-31
336
0141185228
9780141185224
N/A
Book picture is for illustrative purposes only, actual binding, cover or edition may vary.
The book has been read, but looks new. The book cover has no visible wear, and the dust jacket is included if applicable. No missing or damaged pages, no tears, possible very minimal creasing, no underlining or highlighting of text, and no writing in the margins.