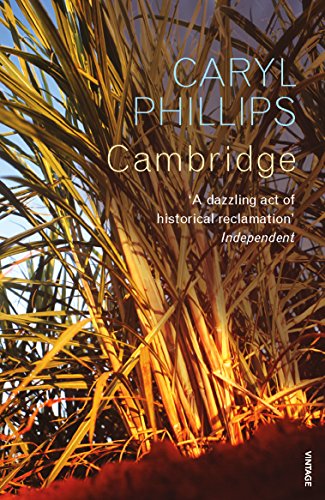 In Stock
£6.49
Cambridge is a powerful and haunting novel set in that uneasy time between the abolition of the slave trade and the emancipation of the slaves.
Very Good Good
9 in stock

Cambridge is a powerful and haunting novel set in that uneasy time between the abolition of the slave trade and the emancipation of the slaves. It is the story of Emily Cartwright, a young woman sent from England to visit her father's West Indian plantation, and Cambridge, a plantation slave, educated and Christianised by his first master in England and now struggling to maintain his dignity.

"A striking novel that pushes you dizzily into another time and place... Reading it is like being in the middle of a vibrant dream" * Sunday Times *
"Phillips points up the hypocrisy and humiliation of a society at breaking point; revealing it with subtlety, humour and humanity" * Sunday Telegraph *
"Caryl Phillips has proved himself to be among the best and most productive writers of his generation...with Cambridge he takes a firm step towards joining the company of the literary giants of our time" * New York Times *
"This powerful, seductively readable book, set in a 19th century slave plantation, finally puts the sickening realities of the slave trade firmly on the map" * Guardian *
"Phillips is a linguistic and cultural virtuoso" * The Times *

Caryl Phillips was born in St Kitts and now lives in London and New York. He has written for television, radio, theatre and cinema and is the author of twelve works of fiction and non-fiction. Crossing the River was shortlisted for the 1993 Booker Prize and Caryl Phillips has won the Martin Luther King Memorial Prize, a Guggenheim Fellowship and the James Tait Black Memorial Prize, as well as being named the Sunday Times Young Writer of the Year 1992 and one of the Best of Young British Writers 1993. A Distant Shore won the Commonwealth Writers' Prize in 2004 and Dancing in the Dark was shortlisted in 2006.

GOR002817180
Cambridge by Caryl Phillips
Caryl Phillips
Used - Very Good
Paperback
Vintage Publishing
2008-05-01
240
0099520567
9780099520566
N/A
Book picture is for illustrative purposes only, actual binding, cover or edition may vary.
This is a used book - there is no escaping the fact it has been read by someone else and it will show signs of wear and previous use. Overall we expect it to be in very good condition, but if you are not entirely satisfied please get in touch with us.