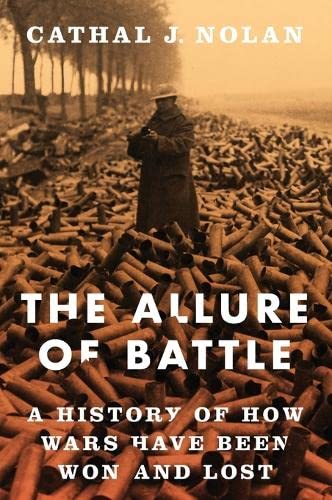 The Allure of Battle
by Cathal J. Nolan

In Stock
£19.99
The Allure of Battle is an accessible, provocative, and entertaining book that illuminates fresh debate about the conduct of warfare and the character of battle for readers of military history.
New£19.99
Only 3 left

The Allure of Battle Summary

The Allure of Battle: A History of How Wars Have Been Won and Lost by Cathal J. Nolan

Cathal Nolan's The Allure of Battle shows that while wars have shaped the history of the modern world, their outcomes are decided by many other factors. The book argues that major battles are not decisive to the outcome of wars; rather, wars depend on longer-term attrition in which the side that wins gradually and remorselessly overwhelms the other with larger arsenals and greater reserves of manpower. To illustrate his argument, Nolan draws on conflicts throughout the world and throughout history (aside from classical or medieval warfare, which, he argues, had greatly different characters from each other and from early modern and modern warfare). The Allure of Battle systematically examines a series of great battles, each described in the standard literature as the "turning pointof the war in which they occurred. It asks how they actually fit in the histories of those wars and military history more generally. In each case Nolan will show that even huge and important battles, which are widely considered to have been decisive, actually and mainly contributed to victory or defeat by compressing attrition, which is what in the end led to the outcome of each and every war. He will also illustrate how the character of longer wars of attrition also fundamentally shaped extended periods of postwar peace, that military, moral, and materiel exhaustion rather than battlefield supremacy per se was determinative. Nolan is not proposing to have discovered linear or universal laws about modern military history, nor is he attempting a "theory of war. " His point is to look at battles within the context of the wider conflict in which they took place. The result will be an accessible, provocative, and even entertaining book that will reflect fresh thinking in the historical community about the conduct of warfare in terms that will appreciated by a wider readership. The Allure of Battle is an accessible, provocative, and entertaining book that illuminates fresh debate in the historical community about the conduct of warfare in terms that readers of military history will appreciate.

The Allure of Battle Reviews

Nolan exhibits an impressive depth of knowledge of his subject; his work is marked by stylish writing with extensive discourse on political and social as well as military issues * Russell K. Brown, The Journal of America's Military Past *
The Allure of Battle provides new and fresh insights into war studies and offers several new and fresh perspectives to look at military history. This is a very well-researched book. Nolan's credentials on the subject are unmatched. It will change the way you have looked at military history up until now. It is a must-read for both students and experts of military history. * Washington Book Review *
In the unusual The Allure of Battle, Cathal J. Nolan seeks to demolish how historians view war - and succeeds surprisingly well... I cannot remember reading anything in the last few years that has made me reconsider so many basic questions - What wins wars? What is the most illuminating way to relate military history? Most important, is our own military too focused on battles and insufficiently attentive to what is required to win wars? In other words, are our generals flailing because they try to substitute battlefield skill for strategic understanding? (I think they are.) Ultimately, Nolan is persuasive that too much attention has been paid to battles. * Thomas E. Ricks, New York Times Book Review *
Nolan suggests that his book is not written for military historians but for the wider public, in part to alert the general reader to the distorted image of the decisiveness in battle. He is too modest: Everyone can benefit from what is a particularly fine history of war. * Ian F.W. Beckett, The Wall Street Journal *
brilliant * National *