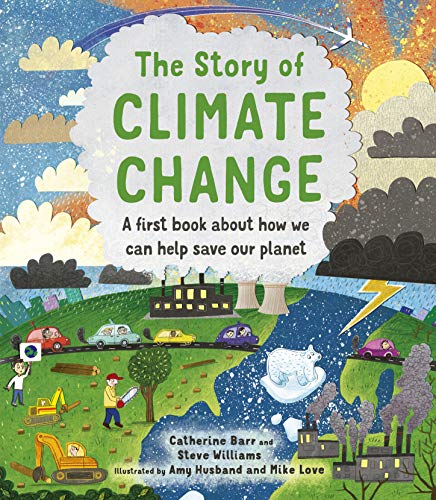 The Story of Climate Change by Catherine Barr

A first-look at the causes and effects of climate change for young readers. Featuring bite-size text by Catherine Barr and Steve Williams, and vibrant illustrations by Amy Husband and Mike Love, this honest yet inspiring title charts the history of our planet's climate and the science behind global warming. Kids will be energised to make a change and do their part to fight the climate emergency.

The Story of Climate Change by Catherine Barr

The Story of Climate Change introduces one of the most important issues facing our world today, and tells you what you can do to help make a change!

Combining history with science, this book charts the changes in our Earth's climate, from the beginnings of the planet and its atmosphere, to the Industrial revolution and the dawn of machinery. You'll learn all about the causes of climate change, such as factory farming and pollution, and the effects that climate change has on humans and animals across the world.

As well as discovering the effects of global warming, you'll discover practical ways we can work together to solve it, from using renewable energy to swapping meat for vegetables in our diet.

With fact-packed text by Catherine Barr and vibrant illustrations by Amy Husband and Mike Love, The Story of Climate Change will give you all the information you need, and will inspire you to do your part to fight the climate emergency!

Catherine Barr worked at Greenpeace International for seven years as a wildlife and forestry campaigner and has a long-running interest in environmental issues. While working as an editor at the Natural History Museum, she researched and wrote two major summer exhibitions: Dinosaurs of the Gobi Desert and Myths and Monsters. Her previous books for Frances Lincoln are The Story of Inventions and The Story of Life. She lives on a hill near Hay-on-Wye in Herefordshire with her partner and two daughters.

Steve Williams is a biologist with a degree in Marine Biology and Applied Zoology. His lifelong love of wildlife was further inspired by eight years at sea, and he now teaches science in a school in Wales. He is a beekeeper and lives near Hay-on-Wye with his wife and two daughters.

Amy Husband studied Graphic Art at Liverpool School of Art. Her first picture book, Dear Miss, was winner of the Cambridgeshire Children's Picture Book Award in 2010, and she also wrote and illustrated Dear Santa, in the same series. Amy lives in York with her partner, working in a studio with views of York Minster.

Mike Love is an illustrator from the West Midlands. Since graduating from the Aberystwyth School of Art in 2012, Mike has enjoyed being part of a wide variety of projects.

NGR9780711256286
9780711256286
0711256284
The Story of Climate Change by Catherine Barr
Catherine Barr
Story of...
New
Hardback
Frances Lincoln Publishers Ltd
2021-03-02
40
N/A
Book picture is for illustrative purposes only, actual binding, cover or edition may vary.
This is a new book - be the first to read this copy. With untouched pages and a perfect binding, your brand new copy is ready to be opened for the first time
Trustpilot