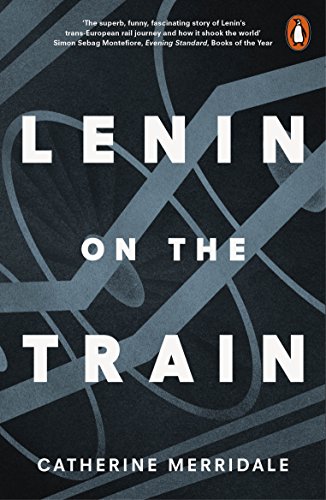 Lenin on the Train
by Catherine Merridale

Lenin on the Train Summary

Lenin on the Train by Catherine Merridale

'The superb, funny, fascinating story of Lenin's trans-European rail journey and how it shook the world' Simon Sebag Montefiore, Evening Standard, Books of the Year

'Splendid ... a jewel among histories, taking a single episode from the penultimate year of the Great War, illuminating a continent, a revolution and a series of psychologies in a moment of cataclysm and doing it with wit, judgment and an eye for telling detail' David Aaronovitch, The Times

By 1917 the European war seemed to be endless. Both sides in the fighting looked to new weapons, tactics and ideas to break a stalemate that was itself destroying Europe. In the German government a small group of men had a brilliant idea: why not sow further confusion in an increasingly chaotic Russia by arranging for Vladimir Ilyich Lenin, the most notorious of revolutionary extremists, currently safely bottled up in neutral Switzerland, to go home?

Catherine Merridale's Lenin on the Train recreates Lenin's extraordinary journey from harmless exile in Zurich, across a Germany falling to pieces from the war's deprivations, and northwards to the edge of Lapland to his eventual ecstatic reception by the revolutionary crowds at Petrograd's Finland Station.

With great skill and insight Merridale weaves the story of the train and its uniquely strange group of passengers with a gripping account of the now half-forgotten liberal Russian revolution and shows how these events intersected. She brilliantly uses a huge range of contemporary eyewitnesses, observing Lenin as he travelled back to a country he had not seen for many years. Many thought he was a mere 'useful idiot', others thought he would rapidly be imprisoned or killed, others that Lenin had in practice few followers and even less influence. They would all prove to be quite wrong.

Lenin on the Train Reviews

Twice I missed my stop on the Tube reading this book... this is a jewel among histories, taking a single episode from the penultimate year of the Great War, illuminating a continent, a revolution and a series of psychologies in a moment of cataclysm and doing it with wit, judgment and an eye for telling detail... Catherine Merridale, who won the Wolfson history prize for Red Fortress, her 2013 book about the Kremlin, is one of those historians whose work allows you to understand something more about the world we inhabit now. -- David Aaronovitch * The Times *
'A detailed look at the famous train journey... fascinatingly realist... [Merridale] is good at capturing the frankly dodgy atmosphere of high politics and low motives that swirled around post-abdication Russia... Merridale can bring humour into the most gruesome moments. -- Andre Van Loon * Spectator *
Catherine Merridale is one of the foremost foreign historians of Russia, combining wry insights with deep sympathy for the human beings suffering the tragedies she writes about... It combines diplomatic intrigue, spycraft, towering personalities, bureaucratic bungling, military history and ideology. Ms Merridale neatly unites background and foreground, and deftly evokes the atmosphere of the time... excellent * Economist *
Praise for RED FORTRESS: 'Magnificent ... [a] a superbly written book' Telegraph 'A zingy, razor-keen history of the Kremlin' Spectator Books of the Year 'Exhilarating' * Guardian *
A brisk and often witty overview for the lay reader of the circumstances leading up to the February and October revolutions. -- Helen Rappaport * The Sunday Times *
With a novelists' readability and a fertile imagination... Merridale retraces his week-long journey... At the same time, she skilfully weaves into the story the unfolding revolution * Observer Review *
With the 100th anniversary of the two Russian revolutions of 1917 around the corner... surely no author will give a better account than Merridale of how, in that fateful year, Lenin made his way with German help from exile in Switzerland to Russia. * Financial Times BOOKS OF THE YEAR *
Fills a lacuna in the canonical record of Soviet communism.... A superbly written narrative history that draws together and makes sense of scattered data, anecdotes, and minor episodes, affording us a bigger picture of events that we now understand to be transformative * Kirkus Reviews *
Merridale corrects factual errors made by predecessors and opens a fresh interpretive perspective. Personal reenactment of Lenin's eight-day train-and-ferry journey gives force to materials uncovered through assiduous research in newly opened archives as Merridale resolves perplexities long surrounding the political gambles, devious espionage, and shadowy financing that transport Lenin through Germany on a sealed train bound for a land tempestuously shedding its czarist past and desperate for a leader to guide it into an uncharted future. . . . History recovered as living drama * Booklist *
A colorful, suspenseful, and well-documented narrative * Publishers Weekly *
[This] remarkable account recaptures the idealism that filled this ragtag band of revolutionaries with the desperate belief that their leader would bring a "springtime of hope" to their divided and brutalised country. This is a revealing portrait of Lenin and his fellow travellers at a crucial turning point in world history. -- PD Smith * Guardian *

Catherine Merridale's books include Night of Stone: Death and Memory in Russia, which won the Heinemann Prize for Literature and was shortlisted for the Samuel Johnson Prize, Ivan's War: The Red Army, 1939-45 and Red Fortress: The Secret Heart of Russia's History, which won the Wolfson Prize for History and the Pushkin House Russian Book Prize.

GOR008314368
Lenin on the Train by Catherine Merridale
Catherine Merridale
Used - Very Good
Paperback
Penguin Books Ltd
2017-04-06
368
0141979941
9780141979946
N/A
Book picture is for illustrative purposes only, actual binding, cover or edition may vary.
This is a used book - there is no escaping the fact it has been read by someone else and it will show signs of wear and previous use. Overall we expect it to be in very good condition, but if you are not entirely satisfied please get in touch with us.