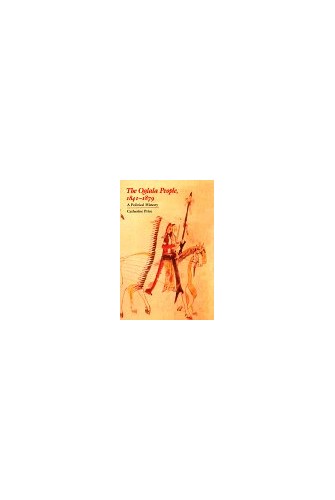 The Oglala People, 1841-79: A Political History by Catherine Price

In the late nineteenth century the U.S. government attempted to reshape Lakota (Sioux) society to accord with American ideals. This acculturation effort included attempts to modify or subvert traditional Lakota political customs and to replace traditional leadership with individuals more attuned to government desires. Catherine Price charts the political strategies employed by Oglala councilors as they struggled to preserve their political customs and autonomy. She examines Lakota concepts of leadership and decision-making authority, highlighting the fluid political relationship among the several forms of Oglala leadership, such as the itancan (symbolic fathers of bands, or tiyospaye). Over the years Oglala leaders had to deal not only with their internal political questions but also with their relations to other Lakota bands, particularly those who rejected a relationship with the United States. The shifting tribal relations and the network of conflicts and accommodations were largely impenetrable to U.S. agents, who were often frustrated by their inability to understand Lakota leadership or opinions. U.S. officials' despair over apparent intransigence or mercurial changes in attitude contributed as much to misunderstanding and conflict as did internal Lakota dissension and shifts in alliance. Examining events in this period from an Oglala standpoint significantly adds to our understanding of the actions taken by the Oglala and deepens our understanding of their relations with the United States, including such conflicts as the Battle of the Little Bighorn.

"A nuanced and insightful analysis."--Journal of American History--Journal of American History
"Price has added a new dimension by analyzing Oglala internal political structure. She offers insight into how [the Oglalas] sought to cope with the enormous external pressures from the federal government. Well-known personalities like Red Cloud, moreover, are portrayed from the Oglala perspective. . . . Price's study is a helpful corrective to the traditional approach in its attempt to portray active Oglala political participation on their own behalf."--Choice--Choice
"[The] reconstruction of Oglala political customs is the book's strength. . . . The way in which Lakota leaders, especially Red Cloud, made (or refused to make) decisions puzzled and stymied government officials--and later historians--in their quest for command decisions and consistent behavior. Price goes far to explain such inconsistencies, brings order out of the factionalist chaos, and shows decisions were not as incongruous as they might appear. The result is scholarly and a breath of fresh air."--Western Historical Quarterly--Western Historical Quarterly

Catherine Price is an assistant professor in social and behavioral sciences at Palo Alto College in San Antonio, Texas.

GOR009948393
The Oglala People, 1841-79: A Political History by Catherine Price
Catherine Price
Used - Very Good
Hardback
University of Nebraska Press
1996-02-01
242
0803237103
9780803237100
N/A
Book picture is for illustrative purposes only, actual binding, cover or edition may vary.
This is a used book - there is no escaping the fact it has been read by someone else and it will show signs of wear and previous use. Overall we expect it to be in very good condition, but if you are not entirely satisfied please get in touch with us.