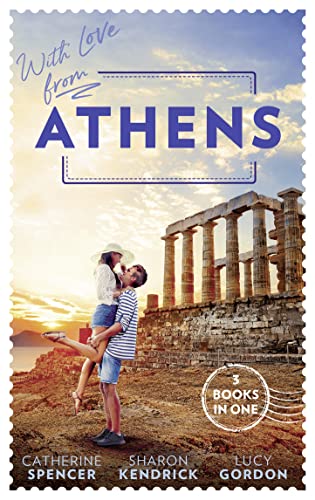 With Love From Athens
by Catherine Spencer

Passion at the Parthenon

With Love From Athens Summary

Passion at the Parthenon

Nurse Emily Tyler has come to Greece with good intentions. But Nikolaos Leonidas sees only a gold digger, with eyes fixed on his family's fortune. A weekend of champagne and seduction on his opulent yacht ought to expose her lies... until Emily reveals she is pregnant... with the Leonidas heir!
*
When Constantine Karantinos learns he has an heir he'll do anything to claim him. Even bringing him and his mother to Greece. But he finds it hard to remember bedding Laura...maybe if he were to seduce her again, it would refresh his memory....
*
Lysandros Demetriou: shipping magnate and Athens' most-sought-after bachelor! But this playboy cannot be tempted, until Petra Radnor whirls into his life. Her beauty is a lure Lysandros cannot resist. When their scorching desire shows no sign of burning out, Lysandros has to decide whether his need for Petra is a temporary craving or a lifelong obsession....

Customer Reviews - With Love From Athens

In the past, Catherine Spencer has been an English teacher which was the springboard for her writing career. Heathcliff, Rochester, Romeo and Rhett were all responsible for her love of brooding heroes! Catherine has had the lucky honour of being a Romance Writers of America RITA finalist and has been a guest speaker at both international and local conferences and was the only Canadian chosen to appear on the television special, Harlequin goes Prime Time. Sharon Kendrick started story-telling at the age of eleven and has never stopped. She likes to write fast-paced, feel-good romances with heroes who are so sexy they'll make your toes curl! She lives in the beautiful city of Winchester - where she can see the cathedral from her window (when standing on tip-toe!). She has two children, Celia and Patrick and her passions include music, books, cooking and eating - and drifting into daydreams while working out new plots. Lucy Gordon cut her writing teeth on magazine journalism, interviewing many of the world's most interesting men, including Warren Beatty and Roger Moore. Several years ago, while staying Venice, she met a Venetian who proposed in two days. They have been married ever since. Naturally this has affected her writing, where romantic Italian men tend to feature strongly. Two of her books have won a Romance Writers of America RITA (R) Award. You can visit her website at www.lucy-gordon.com.

GOR010605295
With Love From Athens: The Greek Millionaire's Secret Child / Constantine's Defiant Mistress / The Greek Tycoon's Achilles Heel by Catherine Spencer
Catherine Spencer
Used - Like New
Paperback
HarperCollins Publishers
2020-04-30
560
0263281426
9780263281422
N/A
Book picture is for illustrative purposes only, actual binding, cover or edition may vary.
The book has been read, but looks new. The book cover has no visible wear, and the dust jacket is included if applicable. No missing or damaged pages, no tears, possible very minimal creasing, no underlining or highlighting of text, and no writing in the margins.