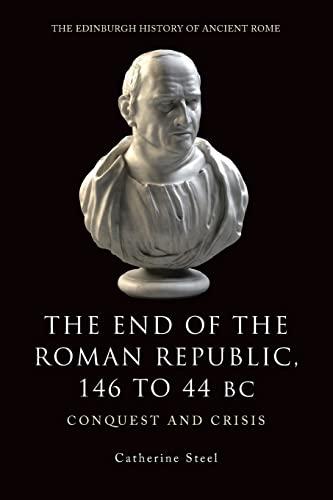 In Stock
£29.99
By 146, Rome had established itself as the leading Mediterranean power. Over the next century, it consolidated its power into an immense territorial empire. This title traces the processes of change which transformed Rome from a republic to a monarchy. It is suitable for academics working on the history of Rome and the Roman Republic.
New£29.99
Only 2 left

The End of the Roman Republic 146 to 44 BC Summary

The End of the Roman Republic 146 to 44 BC: Conquest and Crisis by Catherine Steel

This title deals with a crucial and turbulent century for the Roman Republic. By 146, Rome had established itself as the leading Mediterranean power. Over the next century, it consolidated its power into an immense territorial empire. At the same time, the internal balance of power shifted dramatically, as a narrow ruling elite was challenged first by the rest of Italy, and then by military commanders, a process which culminated in the civil war between Pompeii and Caesar and the re-establishment of monarchy. Catherine Steel tells the history of this crucial and turbulent century, focussing on the issues of freedom, honour, power, greed and ambition, and the cherished but abused institutions of the Republic which were central to events then and which have preoccupied historians ever since. It traces the processes of change which transformed Rome from a republic to a monarchy. It explores a period of political crisis in relation to its military and cultural dynamism. It analyses the political culture of the Roman Republic as a dynamic and evolving system which reflected changes in citizenship and in the ruling elite. It is suitable for undergraduates, postgraduates and academics working on the history of Rome and the Roman Republic.

The End of the Roman Republic 146 to 44 BC Reviews

This is a very readable account of a momentous and exceedingly violent time in Roman history. It manages to navigate numerous historiographic debates on this period lucidly.

To sum up: Steel has provided a lucid and persuasive narrative of the late Republic, complemented by a series of perceptive and thought-provoking analyses: there is a real wealth of ideas here. I will certainly be recommending the book to my students, and consulting it frequently myself too.

Catherine Steel is Lecturer in Classics and Ancient History at the University of Glasgow.

Section I:146-91 BC; 1. The crises of the later second century BC; 1.1 The Wars in Spain; 1.2 The tribunate of Tiberius Gracchus; 1.3 Rome and the Eastern Mediterranean, 146-122; 1.4 The tribunates of Gaius Gracchus; 1.5 Foreign and domestic politics at the end of the second century BC; 1.6 The outbreak of the Social War; 2. Domestic politics: violence and its accommodation; 2.1 Elite competition; 2.2 Issues and ideology; 3. Imperial power: failure and control; 3.1 The parameters of Roman foreign policy; 3.2 War and imperial expansion; 3.3 The administration of peace; 3.4 Rome and the rest of Italy; Section II: 91-70 BC; 4. Social War, Civil War and the imposition of a new order; 4.1 The Social War; 4.2 Losing the peace: the transition to civil war; 4.3 Domestic politics and foreign affairs in the 80s BC; 4.4 The Sullan res publica; 4.5 The consulship of Pompeius and Crassus: a fresh start?; 5. The limits of autocracy; 5.1 Power and armed force; 5.2 Experiments in autocracy; 5.3 The Sullan res publica; 5.4 Rome, Italy and the Mediterranean; 5.5 Causes of change; Section III: 70-44 BC; 6. The end of the Republic, 70-44 BC; 6.1 The continuing problem of Mithridates; 6.2 Pompeius' campaigns 67-62 BC; 6.3 Italian crises; 6.4 Factionalism, the people, and the collapse of order; 6.5 Foreign Policy in the 50s; 6.6 The last years of the Republic; 6.7 The Civil War; 7. Imperial expansion: novelty and success; 7.1 Patterns of expansion; 7.2 Structures and methods of imperial conquest and government; 8. Elite competition, popular discontent and the failure of collective government; 8.1 Political culture at the end of the Republic; 8.2 The career of Pompeius; 8.3 Popular arbitration; 8.4 The implications of Caesar's dictatorship.

NGR9780748619450
The End of the Roman Republic 146 to 44 BC: Conquest and Crisis by Catherine Steel
Catherine Steel
The Edinburgh History of Ancient Rome
New
Paperback
Edinburgh University Press
2013-03-05
320
0748619453
9780748619450
N/A
Book picture is for illustrative purposes only, actual binding, cover or edition may vary.
This is a new book - be the first to read this copy. With untouched pages and a perfect binding, your brand new copy is ready to be opened for the first time.