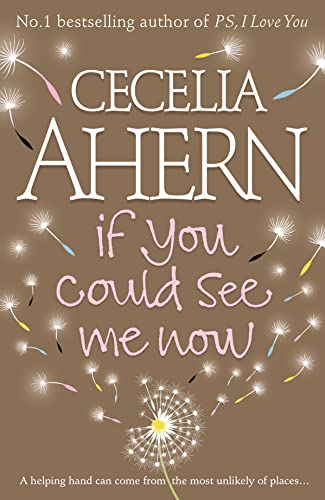 If You Could See Me Now
by Cecelia Ahern

Tender, magical and captivating - a story of family, friends, and the unlikeliest of romances . . .

If You Could See Me Now Summary

If You Could See Me Now by Cecelia Ahern

Tender, magical and captivating - a story of family, friends, and the unlikeliest of romances . . .

Everything in Elizabeth Egan's life has its place, from the espresso cups in her gleaming kitchen to the swatches and paint pots of her interior design business. Order and precision keep life under control - and Elizabeth's heart from the pain and hurt she has suffered in the past.

The only cloud on the horizon is her sister Saoirse, a red-haired whirlwind always leaving behind pieces which Elizabeth struggles to pick up - including her six-year-old son Luke. Being a reluctant mother while trying to keep her business on track is a full-time job, one which leaves little room for error - or fun.

Until, one day, a stranger unexpectedly comes into their lives. Ivan is carefree, spontaneous and always looking for adventure - everything that Elizabeth is not. In no time at all, he has crept under her skin and started to change her life in ways she could never have .

She knows barely anything about Ivan - who he is and whether he is everything he seems. And if there is a future for their blossoming relationship...

Full of Cecelia Ahern's trademark warmth and poignancy, If You Could See Me Now is a love story with heart - and just a little bit of magic...

If You Could See Me Now Reviews

PRAISE FOR WHERE RAINBOWS END

`Guaranteed to tug on your heartstrings' Glamour

`Like an Irish Sleepless in Seattle and almost certainly the chick-lit bestseller of the year.' In Style

'A heartwarming, completely absorbing tale of love and friendship.' Company

GOR000460202
If You Could See Me Now by Cecelia Ahern
Cecelia Ahern
Used - Very Good
Paperback
HarperCollins Publishers
2005-11-21
336
0007212259
9780007212255
N/A
Book picture is for illustrative purposes only, actual binding, cover or edition may vary.
This is a used book - there is no escaping the fact it has been read by someone else and it will show signs of wear and previous use. Overall we expect it to be in very good condition, but if you are not entirely satisfied please get in touch with us.