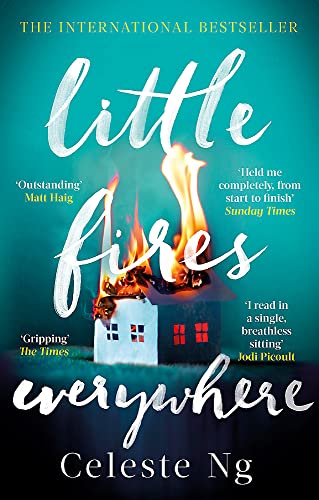 'To say I love this book is an understatement...It moved me to tears' Reese Witherspoon

'Beautifully written, completely charming, and extremely wise on the subject of adolescence and influence' Nick Hornby

Everyone in Shaker Heights was talking about it that summer: how Isabelle, the last of the Richardson children, had finally gone around the bend and burned the house down.

In Shaker Heights, a placid, progressive suburb of Cleveland, everything is meticulously planned - from the layout of the winding roads, to the colours of the houses, to the successful lives its residents will go on to lead. And no one embodies this spirit more than Elena Richardson, whose guiding principle is playing by the rules.

Enter Mia Warren - an enigmatic artist and single mother- who arrives in this idyllic bubble with her teenage daughter Pearl, and rents a house from the Richardsons. Soon Mia and Pearl become more than just tenants: all four Richardson children are drawn to the mother-daughter pair. But Mia carries with her a mysterious past, and a disregard for the rules that threatens to upend this carefully ordered community.

When old family friends attempt to adopt a Chinese-American baby, a custody battle erupts that dramatically divides the town - and puts Mia and Elena on opposing sides. Suspicious of Mia and her motives, Elena is determined to uncover the secrets in Mia's past. But her obsession will come at an unexpected and devastating cost...

'Great characters, interesting plot that leaves you desperate to read more and written beautifully. I loved it and highly recommend it!'

Celeste Ng grew up in Pittsburgh, Pennsylvania, and Shaker Heights, Ohio. She attended Harvard University and earned an MFA from the University of Michigan. Her debut novel, Everything I Never Told You, won the Hopwood Award, the Massachusetts Book Award, the Asian/Pacific American Award for Literature, and the American Library Association's Alex Award. She is a 2016 National Endowment for the Arts Fellow, and she lives in Cambridge, Massachusetts.

GOR009042346
Little Fires Everywhere by Celeste Ng
Celeste Ng
Used - Very Good
Paperback
Little, Brown Book Group
2018-04-05
400
0349142920
9780349142920
Long-listed for International Dublin Literary Award 2019 (UK)
Book picture is for illustrative purposes only, actual binding, cover or edition may vary.
This is a used book - there is no escaping the fact it has been read by someone else and it will show signs of wear and previous use. Overall we expect it to be in very good condition, but if you are not entirely satisfied please get in touch with us.