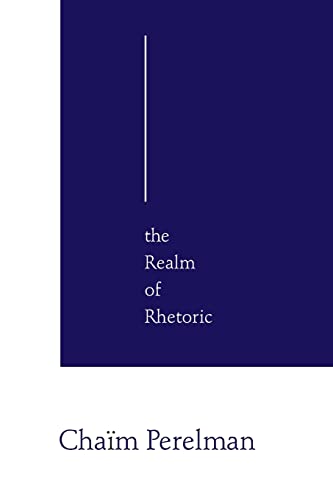 The Realm of Rhetoric
by Chaim Perelman

The Realm of Rhetoric Summary

The Realm of Rhetoric by Chaim Perelman

The Realm of Rhetoric follows in the tradition of the author's The New Rhetoric, hailed for its wide-ranging and innovative approaches to argumentation. In this new study Chaim Perelman continues to develop his ideas on the theory of rhetoric, now even more cogently and persuasively presented. Pruned of much detail present in the earlier book, this new work captures the essence of his thought in a style and presentation suitable to the program and needs of an English-speaking audience. It is an ideal instruction medium for students approaching theories of informal argumentation for the first time. Perelman raises the questions, "How do claims to reasonableness arise in prose that is not formally logical?" and "What does 'reasonableness' mean for some who speaks of 'reasonable men' or 'beyond reasonable doubt'?" He then shows how claims to rationality are embedded in a number of verbal structures heretofore considered exclusively ornamental or dispositional. He identifies and discusses many argumentative techniques in addition to the quasi-logical methods conventionally treated in textbooks and notes numerous subforms of argumentation within each of the general types he identifies.

The Realm of Rhetoric Reviews

"One cannot help but admire and learn from [Perelman's] clear, comprehensive, and wise thinking on argumentation, his spare yet never arid prose, and the quiet elegance of his book's structure. This slim volume will amply reward reflective study by practitioner and theorist, freshman and emeritus."
~Ethics

Chaim Perelman (1912-1984), a Polish-born philosopher of law, studied, taught, and lived most of his life in Brussels. He became the youngest full professor in the history of the Universite Libre de Bruxelles, where he remained for the rest of his career. He was among the most important argumentation theorists of the twentieth century.

GOR008313878
The Realm of Rhetoric by Chaim Perelman
Chaim Perelman
Used - Very Good
Paperback
University of Notre Dame Press
1982-12-31
185
0268016054
9780268016050
N/A
Book picture is for illustrative purposes only, actual binding, cover or edition may vary.
This is a used book - there is no escaping the fact it has been read by someone else and it will show signs of wear and previous use. Overall we expect it to be in very good condition, but if you are not entirely satisfied please get in touch with us.