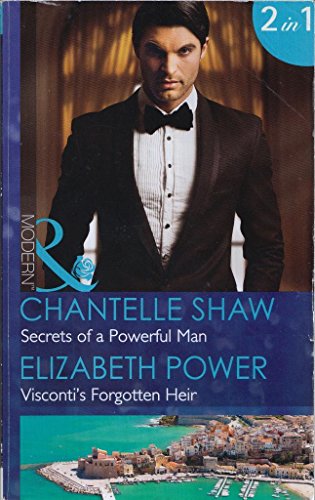 Secrets of a Powerful Man by Chantelle Shaw

Secrets of a Powerful Man

Secrets of a Powerful Man

Salvatore Castellano is haunted by the accident that has left a blank in his memory. His young daughter is the one bright light in his dark existence and he'll do anything for her... Even if that means moving a delicious temptation under his roof!

Darcey Rivers can't refuse Salvatore's proposal...but the closer she gets to this powerful man, the closer he gets to uncovering her secrets!

The memory of his touch...

Single mum Magenta James feels as if her life is back on track after suffering from amnesia...until she meets Andreas Visconti's familiar sapphire gaze across the interview desk.

She just knows the Italian CEO is the father of her child, but when she doesn't get the job it's clear they parted on bad terms. Then he offers her a new role...as his very personal assistant.

Chantelle Shaw enjoyed a happy childhood making up stories in her head. Always an avid reader, Chantelle discovered Mills & Boon as a teenager and during the times when her children refused to sleep, she would pace the floor with a baby in one hand and a book in the other! Twenty years later she decided to write one of her own. Writing takes up most of Chantelle's spare time, but she also enjoys gardening and walking. She doesn't find domestic chores so pleasurable! English author, Elizabeth Power was first published by Mills and Boon in 1986. Widely travelled, many places she has visited have been recreated in her books. Living in the beautiful West Country, Elizabeth likes nothing better than walking with her husband in the countryside surrounding her home and enjoying all that nature has to offer. Emotional intensity is paramount in her writing. Times, places and trends change, she says, but emotion is timeless.
GOR005220986
9780263907100
0263907104
Secrets of a Powerful Man: Secrets of a Powerful Man / Visconti's Forgotten Heir (Mills & Boon Modern) (The Bond of Brothers, Book 2) by Chantelle Shaw
Chantelle Shaw
The Bond of Brothers
Used - Very Good
Paperback
HarperCollins Publishers
20131101
384
N/A
Book picture is for illustrative purposes only, actual binding, cover or edition may vary.
This is a used book - there is no escaping the fact it has been read by someone else and it will show signs of wear and previous use. Overall we expect it to be in very good condition, but if you are not entirely satisfied please get in touch with us
Trustpilot