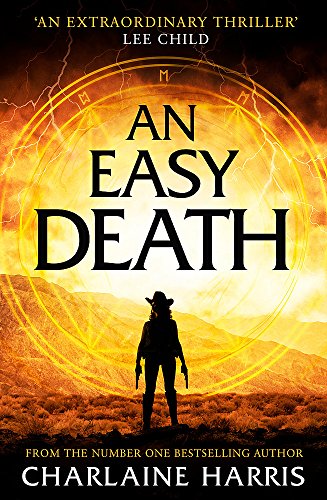 An Easy Death: the Gunnie Rose series
by Charlaine Harris

An Easy Death: the Gunnie Rose series by Charlaine Harris

From the inspiration behind HBO's True Blood comes an electrifying new thriller centred on a young gunslinging mercenary, Lizbeth Rose . . .

Set in a fractured United States, in the southwestern country now known as Texoma, this is a world where magic is acknowledged but mistrusted. Battered by a run across the border to Mexico, gunslinger Lizbeth Rose takes a job offer from a pair of Russian wizards.

She may be young, but Gunnie Rose has acquired a fearsome reputation and the wizards are at a desperate crossroads, even if they won't admit it. They're searching frantically to locate the only man whose blood they believe can save their tsar's life.

As the trio journey through an altered America, they're set upon by enemies. It's clear that a powerful force does not want them to succeed in their mission. Lizbeth Rose is a gunnie who has never failed a client, but her oath will test all of her skills and resolve to get them all out alive.

'Harris has a remarkable talent for world building' Booklist

'Will leave readers enthralled. [A] fascinating setting and a heroine who's sure to be a new fan favourite' Publishers' Weekly

Charlaine Harris is a New York Times bestselling author who has been writing for over thirty-five years. Born and raised in the Mississippi Delta, she is the author of the Aurora Teagarden mysteries, basis for the Hallmark Movies & Mysteries Aurora Teagarden original movies; the Midnight, Texas series, now airing on NBC; the Sookie Stackhouse urban fantasy series, basis for the HBO show True Blood; the Lily Bard mysteries; the Harper Connelly mysteries; and the co-author of the graphic novel trilogy Cemetery Girl. Harris now lives in Texas with her husband and two rescue dogs.

GOR009542679
An Easy Death: the Gunnie Rose series by Charlaine Harris
Charlaine Harris
Gunnie Rose
Used - Very Good
Paperback
Little, Brown Book Group
2018-10-02
320
0349418039
9780349418032
N/A
Book picture is for illustrative purposes only, actual binding, cover or edition may vary.
This is a used book - there is no escaping the fact it has been read by someone else and it will show signs of wear and previous use. Overall we expect it to be in very good condition, but if you are not entirely satisfied please get in touch with us.