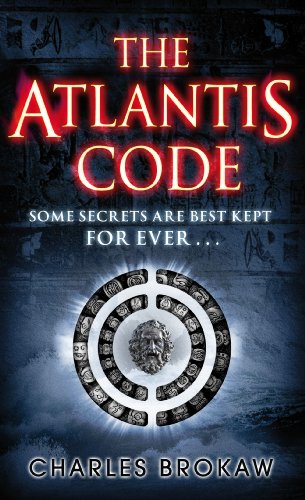 The Atlantis Code
by Charles Brokaw

Out of Stock
An ancient artifact is discovered in a dusty antiquities shop in Alexandria, Egypt - the long forgotten trinket soon becomes the center of the most deadly archaeological hunt in history. The 20,000 year-old relic is inscribed with what appears to be the long lost language of Atlantis.
Very Good
Only 0 left

The Atlantis Code by Charles Brokaw

Hidden away in a dusty antiquities shop in Egypt, an ancient artefact is discovered.

The 20,000 year-old relic is inscribed with what appears to be the long lost language of Atlantis.

It quickly becomes the centre of the deadly archaeological hunt in history . . .

Only one man is able to decode its meaning. The world's foremost linguist Dr Thomas Lourdes. But can he stay alive long enough?

Meanwhile, an earthquake shocks Spain, uncovering a most unexpected site - one which the Vatican rush to be the first to explore.

Could it be that the lost city of Atlantis ready to be found?

'Brokaw's hero is Indiana Jones without the whip. Who knew archaeology could be so exciting? Wonderful entertainment' Stephen Coonts, bestselling author of The Traitor

'Will take you to a new level of mystery, wonder, adventure and excitement' Deepak Chopra

'A rollicking adventure, with nonstop action and suspense' Publishers Weekly

The Atlantis Code will take you to a new level of mystery, wonder, adventure and excitement * Deepak Chopra *
Short, gripping chapters move the action from Egypt to Russia to Africa to London. Indiana Jones meets The Da Vinci Code. Look out, Dan Brown, Brokaw can play this game a lot better than most of your imitators * Booklist Review *
In the 19th century, the equivalent of a blockbuster movie was a tense, thrilling novel, often told in serial form. We tend to forget that the modern novel need not be anything more significant than excellent entertainment, which is the perfect description of Charles Brokaw's The Atlantis Code . . . A rollicking adventure, with nonstop action and suspense. Readers can only hope that Brokaw is prepared to send Professor Lourds on further quests * Publishers Weekly *
A winning combination of all the ingredients an adventure addict could want: great action, intrepid archeologists, dark conspiracies, cliffhangers, and a real sense of wonder -- Kevin J. Anderson, New York Times bestselling co-author of PAUL OF DUNE and author of THE EDGE OF THE WORLD
Brokaw's hero is Indiana Jones without the whip. Who knew archeology could be so exciting? Wonderful entertainment. -- Stephen Coonts, New York Times bestselling author of THE TRAITOR
Storytelling doesn't get much better than this. I've set this one aside to read again! -- David Hagberg, New York Times bestselling author of THE EXPEDITER

The author is a well-known figure in the literary community, with many awards and books to his credit. He's been a university professor, a teacher, a little league coach and a rodeo cowboy. He's a frequent speaker who has given lectures at such widely divergent places as the CIA, West Point, and science fiction conventions. He lives in the Midwest with his family.

GOR001016005
The Atlantis Code by Charles Brokaw
Charles Brokaw
Thomas Lourdes
Used - Very Good
Paperback
Penguin Books Ltd
2009-06-01
592
0141040807
9780141040806
N/A
Book picture is for illustrative purposes only, actual binding, cover or edition may vary.
This is a used book - there is no escaping the fact it has been read by someone else and it will show signs of wear and previous use. Overall we expect it to be in very good condition, but if you are not entirely satisfied please get in touch with us.