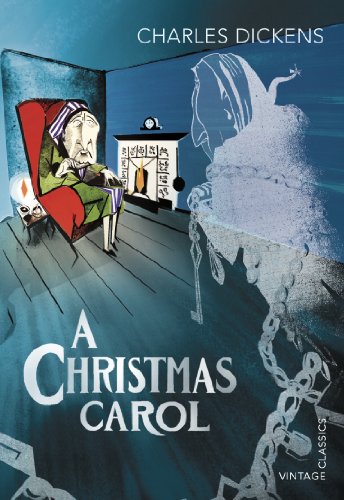 A Christmas Carol
by Charles Dickens

A Christmas Carol by Charles Dickens

'Bah! Humbug!' Mr Scrooge is a squeezing, wrenching, grasping, scraping, clutching, miserable old man. Nobody stops him in the street to say a cheery hello; nobody would dare ask him for a favour. And I hope you'd never be so foolish as to wish him a 'Merry Christmas'! Scrooge doesn't believe in Christmas, charity, kindness - or ghosts. But one cold Christmas Eve, Scrooge receives some unusual visitors who show him just how very mistaken he's been... BACKSTORY: Learn all about how the author Charles Dickens invented Christmas!

"It has it all: a spooky ghost story, a heartwarming redemption and a great plot with a satisfyingly ending" * The Times *
"A story which, perhaps more than any other, sums up the spirit of the British Christmas" * Sunday Telegraph *
"A little masterpiece...irresistible" * Sunday Express *
"Marley's ghostly face on the knocker of Scrooge's door still gives me the shivers" -- Michael Morpurgo * Independent *
"So what makes these different to any other set of classics? In a moment of inspiration Random House had the bright idea of actually asking Key stage 2 children what extra ingredients they could add to make children want to read. And does it work? Well, put it this way...my 13-year-old daughter announced that she had to read a book over the summer holiday and, without any prompting, spotted The Boy in the Striped Pyjamas...and proceeded to read it! Now, if you knew my 13-year-old daughter, you would realise that this is quite remarkable. She reads texts, blogs and tags by the thousand - but this is the first book she has read since going to high school, so all hail Vintage Classics!" * National Association for the Teaching of English *

Charles Dickens was a brilliant and prolific writer, probably the most famous nineteenth century English novelist. He was very successful during his lifetime and his books have never been out of print. The exciting plots and fantastic characters in his books have meant they have all been adapted (in some cases, many times over) for television or the big screen. Charles Dickens was born on 7 February 1812 in Portsmouth. He was one of eight children, and at first his family enjoyed a happy life in the countryside of Kent. But Dickens' father was not very good at managing his money, and when the family fell into financial difficulties they had to move to London. In Dickens' time people who could not pay their debts were sent to a kind of prison, and Dickens' father eventually ended up in one of these debtor's prisons, called the Marshalsea. Charles was forced to leave school and go to work in a `blacking factory' where he pasted labels on to pots for many hours a day. Even though Charles was only twelve at this time, he understood that without education he would never escape the poverty that had so entrapped his family. Charles often used his childhood experiences in his books. For instance, in David Copperfield, the hero Davy is taken out of school by his cruel stepfather and sent to work in a similar factory. Another novel, Little Dorrit, is set in and around the Marshalsea prison. Fortunately Charles was eventually sent back to school. He went to work as a lawyer's clerk, and then as a political reporter. In 1833 he began to publish short stories and essays in newspapers and magazines. His first book, The Pickwick Papers, was published in instalments in a monthly magazine, and was a roaring success. Even before this book was finished, Charles began writing another novel, Oliver Twist. This is one of his most famous books - perhaps you've read it, or seen the musical or one of the film adaptations? Many other novels followed and Dickens became a celebrity in America as well as Britain. He also set up and edited the journals Household Words (1850-9) and All the Year Round (1859-70). Dickens used his books to highlight the suffering of the poor, the inadequate support provided to them, and the massive inequalities between the different ranks of society. This social and political commentary was very influential and it is believed Dickens' work did a great deal to reform workhouses, prisons, and most particularly public opinion of the working classes. Charles travelled all over Britain and America giving public readings from his books. He was a wonderful performer(at one point he had wanted to be an actor) and his readings were said to be electrifying - women in the audience would scream and faint when he read about the murder of Nancy from Oliver Twist. His readings were therefore extremely popular, and on some occasions Dickens only charged a penny for tickets so that poorer people could also attend. In later years, these energetic readings took a terrible toll on his failing health. Dickens died after stroke on 9 June 1870, leaving his last novel, The Mystery of Edwin Drood, unfinished. He is buried in Westminster Abbey.

GOR004414223
A Christmas Carol by Charles Dickens
Charles Dickens
Used - Very Good
Paperback
Vintage Publishing
2012-09-03
160
009957375X
9780099573753
N/A
Book picture is for illustrative purposes only, actual binding, cover or edition may vary.
This is a used book - there is no escaping the fact it has been read by someone else and it will show signs of wear and previous use. Overall we expect it to be in very good condition, but if you are not entirely satisfied please get in touch with us.