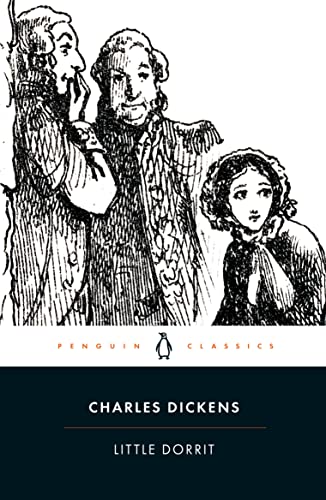 Used Price
£5.49
New RRP £8.99
Free Shipping in the UK
When Arthur Clennam returns to England after many years abroad, he takes a kindly interest in Amy Dorrit, his mother's seamstress, and in the affairs of Amy's father, William Dorrit, a man of shabby grandeur, long imprisoned for debt in Marshalsea prison.
Reviews:
Trustpilot
Very Good Good Well Read

A novel of serendipity, of fortunes won and lost, and of the spectre of imprisonment that hangs over all aspects of Victorian society, Charles Dickens's Little Dorrit is edited with an introduction by Stephen Wall in Penguin Classics.

When Arthur Clennam returns to England after many years abroad, he takes a kindly interest in Amy Dorrit, his mother's seamstress, and in the affairs of Amy's father, William Dorrit, a man of shabby grandeur, long imprisoned for debt in Marshalsea prison. As Arthur soon discovers, the dark shadow of the prison stretches far beyond its walls to affect the lives of many, from the kindly Mr Panks, the reluctant rent-collector of Bleeding Heart Yard, and the tipsily garrulous Flora Finching, to Merdle, an unscrupulous financier, and the bureaucratic Barnacles in the Circumlocution Office. A masterly evocation of the state and psychology of imprisonment, Little Dorrit is one of the supreme works of Dickens's maturity.

Stephen Wall's introduction examines Dickens's transformation of childhood memories of his father's incarceration in the Marshalsea debtors' prison. This revised edition includes expanded notes, appendices and suggestion for further reading by Helen Small, a chronology of Dickens's life and works, and original illustrations.

"One of the most significant works of the nineteenth century."--Lionel Trilling

GOR001293082
Little Dorrit by Charles Dickens
Charles Dickens
Used - Very Good
Paperback
Penguin Books Ltd
2003-09-25
1024
0141439963
9780141439969
N/A
Book picture is for illustrative purposes only, actual binding, cover or edition may vary.
This is a used book - there is no escaping the fact it has been read by someone else and it will show signs of wear and previous use. Overall we expect it to be in very good condition, but if you are not entirely satisfied please get in touch with us.