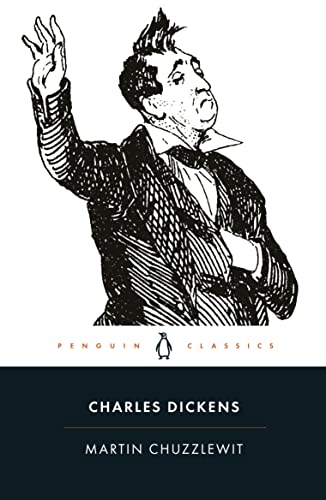 In Stock
£4.99
The greed of Patricia Ingham's family has led wealthy old Martin Chuzzlewit to become suspicious and misanthropic, leaving his grandson and namesake to make his own way in the world. And so young Martin sets out from the Wiltshire home of his supposed champion, the scheming architect Pecksniff, to seek his fortune in America.
Very Good Good
7 in stock

Charles Dickens's powerful black comedy of of hypocrisy and greed, Martin Chuzzlewit is edited with an introduction and notes by Patricia Ingham in Penguin Classics.

The greed of his family has led wealthy old Martin Chuzzlewit to become suspicious and misanthropic, leaving his grandson and namesake to make his own way in the world. And so young Martin sets out from the Wiltshire home of his supposed champion, the scheming architect Pecksniff, to seek his fortune in America. In depicting Martin's journey - an experience that teaches him to question his inherited self-interest and egotism - Dickens created many vividly realized figures: the brutish lout Jonas Chuzzlewit, plotting to gain the family fortune; Martin's optimistic manservant, Mark Tapley; gentle Tom Pinch; and the drunken and corrupt private nurse, Mrs Gamp. With its portrayal of greed, blackmail and murder, and its searing satire on America Dickens's novel is a powerful and blackly comic story of hypocrisy and redemption.

In her introduction, Patricia Ingham examines characterization, the central themes of the novel, and Dickens's depiction of America. This edition also includes two new prefaces, Dickens's postscript written in 1868, his working papers, a note on Mrs Gamp's eccentric speech, a chronology, updated further reading, appendices and original illustrations by 'Phiz'.

If you enjoyed Martin Chuzzlewit, you might like Dickens's Dombey and Son, also available in Penguin Classics.

Martin Chuzzlewit is a dramatic serial on Masterpiece Theatre, a PBS television series presented by WGBH-TV, Boston, made possible by a grant from Mobil Corporation.

Charles Dickens (1812-70) was a political reporter and journalist whose popularity was established by the phenomenally successful PICKWICK PAPERS (1836-7). His novels captured and held the public imagination over a period of more than thirty years. Dickens is considered one of the greatest novelists in the English language.
Patricia Ingham is Fellow of St Anne's College, Reader in English, and The Times Lecturer in English at the University of Oxford.

GOR001042803
Martin Chuzzlewit by Charles Dickens
Charles Dickens
Used - Very Good
Paperback
Penguin Books Ltd
1999-11-25
864
0140436146
9780140436143
N/A
Book picture is for illustrative purposes only, actual binding, cover or edition may vary.
This is a used book - there is no escaping the fact it has been read by someone else and it will show signs of wear and previous use. Overall we expect it to be in very good condition, but if you are not entirely satisfied please get in touch with us.