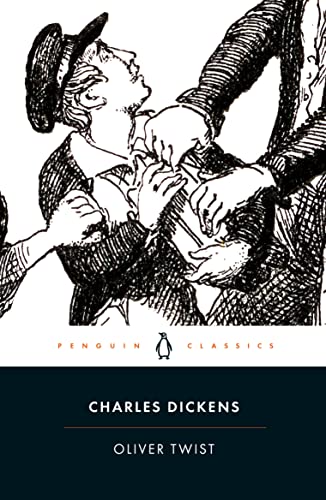 In Stock
£4.49
After running away from the workhouse and pompous beadle Mr Bumble, Oliver Twist finds himself lured into a den of thieves peopled by vivid and memorable characters - the Artful Dodger, vicious burglar Bill Sikes, his dog Bull's Eye, and prostitute Nancy, all watched over by cunning master-thief Fagin.
Very Good
12 in stock

Charles Dickens's Oliver Twist is a gripping portrayal of London's dark criminal underbelly, published in Penguin Classics with an introduction by Philip Horne.

The story of Oliver Twist - orphaned, and set upon by evil and adversity from his first breath - shocked readers when it was published. After running away from the workhouse and pompous beadle Mr Bumble, Oliver finds himself lured into a den of thieves peopled by vivid and memorable characters - the Artful Dodger, vicious burglar Bill Sikes, his dog Bull's Eye, and prostitute Nancy, all watched over by cunning master-thief Fagin. Combining elements of Gothic Romance, the Newgate Novel and popular melodrama, Dickens created an entirely new kind of fiction, scathing in its indictment of a cruel society, and pervaded by an unforgettable sense of threat and mystery.

This Penguin Classics edition of Oliver Twist is the first critical edition to faithfully reproduce the text as its earliest readers would have encountered it from its serialisation in Bentley's Miscellany, and includes an introduction by Philip Horne, a glossary of Victorian thieves' slang, a chronology of Dickens's life, a map of contemporary London and all of George Cruikshank's original illustrations.

If you enjoyed Oliver Twist, you may like Nicholas Nickleby and Little Dorrit, also available in Penguin Classics.

"The power of [Dickens] is so amazing, that the reader at once becomes his captive, and must follow him whithersoever he leads."
--William Makepeace Thackeray

Charles Dickens (1812-70) was a political reporter and journalist whose popularity was established by the phenomenally successful Pickwick Papers (1836-7). His novels captured and held the public imagination over a period of more than thirty years. Philip Horne is a Reader in English at UCL. He is author of the acclaimed 'Henry James: A Life in Letters' and editor of James' The Tragic Muse for Penguin.

GOR001211718
Oliver Twist by Charles Dickens
Charles Dickens
Used - Very Good
Paperback
Penguin Books Ltd
2003-02-21
608
0141439742
9780141439747
N/A
Book picture is for illustrative purposes only, actual binding, cover or edition may vary.
This is a used book - there is no escaping the fact it has been read by someone else and it will show signs of wear and previous use. Overall we expect it to be in very good condition, but if you are not entirely satisfied please get in touch with us.