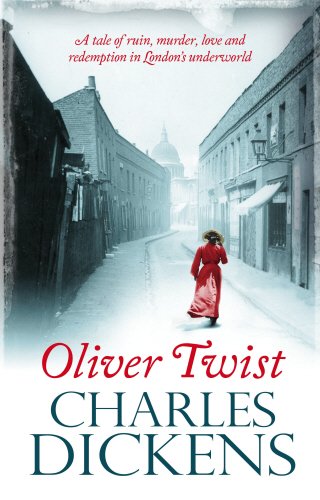 In Stock
£5.99
Hardly an unusual story, and yet young Oliver Twist is by no means an ordinary boy. This is the story peopled by thieves and prostitutes, coloured by violence and neglect, and redeemed by the innocence of one boy searching for a home.
Very Good Well Read
Only 2 left

A baby is born in the humble backstreets of a nameless town. His mother, who is not wearing a wedding ring, dies soon after the birth and her child is given into the care of the local orphanage. Hardly an unusual story, and yet young Oliver Twist is by no means an ordinary boy. He will escape the drudgery of the workhouse, travel to London and be initiated into to a gang of petty crooks. He will find himself at the centre of a criminal plot and an infamous murder, the object of hope, fear, despair and unexpected goodness. This is the story peopled by thieves and prostitutes, coloured by violence and neglect, and redeemed by the innocence of one boy searching for a home.

"An unforgettable journey into criminal behaviour that takes me back to my own childhood fantasies" -- Malcolm McLaren
"The power of [Dickens] is so amazing, that the reader at once becomes his captive" -- William Makepeace Thackeray
"Dickens is huge - like the sky. Pick any page of Dickens and it's immediately recognizable as him, yet he might be doing social satire, or farce, or horror, or a psychological study of a murderer - or any combination of these" -- Susannah Clarke
"The image of little Oliver Twist victimised by poverty, almost seduced by the specious excitement of crime, and then offered the possibility of a lucrative career in authorship is always compelling" * Guardian *
"We leave him most reluctantly, and so will every reader who has any capacity to see and feel whatsoever is most loveable, hateful, or laughable, in the character of the everyday life about him" * Examiner *

Charles Dickens was born in Hampshire on February 7, 1812. His father was a clerk in the navy pay office, who was well paid but often ended up in financial troubles. When Dickens was twelve years old he was send to work in a shoe polish factory because his family had be taken to the debtors' prison. Fagin is named after a boy Dickens disliked at the factory. His career as a writer of fiction started in 1833 when his short stories and essays began to appear in periodicals. The Pickwick Papers, his first commercial success, was published in 1836. In the same year he married the daughter of his friend George Hogarth, Catherine Hogarth. The serialisation of Oliver Twist began in 1837 while The Pickwick Papers was still running. Many other novels followed and The Old Curiosity Shop brought Dickens international fame and he became a celebrity America as well as Britain. He separated from his wife in 1858. Charles Dickens died on 9 June 1870, leaving his last novel, The Mystery of Edwin Drood, unfinished. He is buried in Westminster Abbey.

GOR004670376
Oliver Twist by Charles Dickens
Charles Dickens
Used - Very Good
Paperback
Vintage Publishing
2012-01-19
480
0099561425
9780099561422
N/A
Book picture is for illustrative purposes only, actual binding, cover or edition may vary.
This is a used book - there is no escaping the fact it has been read by someone else and it will show signs of wear and previous use. Overall we expect it to be in very good condition, but if you are not entirely satisfied please get in touch with us.