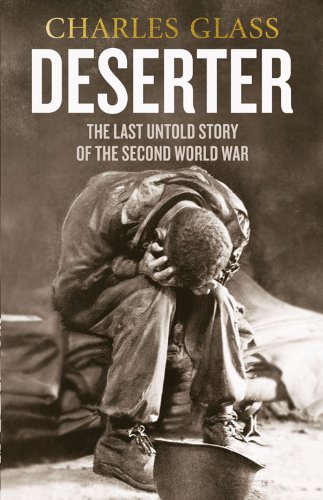 The extraordinary story of the deserters of the Second World War. What made them run? And what happened after they fled?

Deserter: The Last Untold Story of the Second World War by Charles Glass

The extraordinary story of the deserters of the Second World War. What made them run? And what happened after they fled?

During the Second World War, the British lost 100,000 troops to desertion, and the Americans 40,000. Commonwealth forces from Canada, Australia, New Zealand, South Africa and Britain's colonial empire also left the ranks in their thousands. The overwhelming majority of deserters from all armies were front-line infantry troops; without them, the war was harder to win. Many of these men were captured and court martialled, while others were never apprehended. Some remain wanted to this day. Why did these men decide to flee their ranks?

In `Deserter', veteran reporter and historian Charles Glass follows a group of British and American deserters into the heat of battle and explores what motivated them to take their fateful decision to run away. The result is a highly emotional and engaging study of an under-explored area of World War II history.

`Sensitive and thought-provoking ... As this compelling and well-researched book shows, the battlefield was not a place for heroes, but a place where young men were dehumanised and killed ... Given such conditions who among us would not also have considered walking away?' Sunday Telegraph

`[These] stories of individual human beings who eventually cracked under the strain of hardly imaginable fear and misery - are wonderful, unforgettable acts of witness, something salvaged from a time already sinking into the black mud of the past' Guardian

`With his own skill and sensitivity, Glass recreates the inhuman scenes that pummel the other soldiers he examines ... Glass displays an unusual degree of empathy and kinship with these men ... refreshing and stimulating - history told from the loser's perspective. 5*' Nicholas Shakespeare, Daily Telegraph

`What is that pitiful sound? The wail of a thousand military historians wishing they had thought of an idea as original as Charles Glass in Deserter' Sunday Express

`Thought-provoking ... Although deserters were labelled cowards, the picture is much more complicated than that, as Glass convincingly shows ... [he] has opened a can of worms' Mail on Sunday

`An important and refreshing book, shedding light on a subject that deserves attention ... deepens our understanding of the realities of modern warfare and is a welcome challenge to the unquestioning hagiography of "The Greatest Generation"' Times Literary Supplement

`This is a world of frustrated and degrading brutality, racism and moral stupidity, of opportunistic greed, corruption, fear, mental disintegration and crime ... the more familiar narratives of war seem uplifting in contrast ... if Glass makes little attempt at neutrality few readers will mind that ... If you have tears, prepare to shed them now' David Crane, Spectator

Charles Glass is the author of `Americans in Paris', `Tribes with Flags', `The Tribes Triumphant', `Money for Old Rope' and `The Northern Front: An Iraq War Diary'. A world-famous journalist and broadcaster, he was Chief Middle East Correspondent for ABC News from 1983 to 1993, and has covered wars and political upheaval throughout the world. His writing appears in the Independent and the Spectator. He divides his time between Paris, Tuscany and London.
Visit his website at www.charlesglass.net

GOR005037203
Deserter: The Last Untold Story of the Second World War by Charles Glass
Charles Glass
Used - Very Good
Hardback
HarperCollins Publishers
2013-03-28
400
0007345925
9780007345922
N/A
Book picture is for illustrative purposes only, actual binding, cover or edition may vary.
This is a used book - there is no escaping the fact it has been read by someone else and it will show signs of wear and previous use. Overall we expect it to be in very good condition, but if you are not entirely satisfied please get in touch with us.