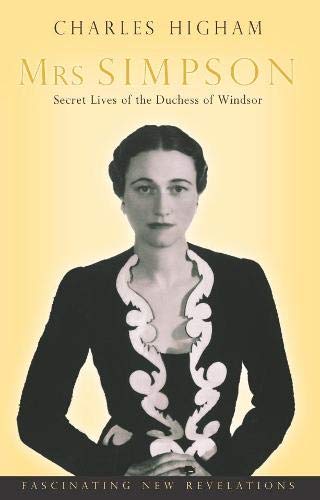 In Stock
£3.99
An explosive biography, substantially updated with fascinating new material about the Duke and Duchess of Windsor
Very Good Good
Only 4 left

Mrs Simpson: Secret Lives of the Duchess of Windsor by Charles Higham

The romance of the Duke and Duchess of Windsor has been called the greatest love story of the twentieth century. However with the first edition of this biography in 1988, highly acclaimed author Charles Higham used explosive secret intelligence files to reveal a far darker side to their forty-year relationship. Now the author has re-visited and updated his international bestseller, resulting in a fascinating, and at times shocking expose of Wallis Simpson. New and disturbing revelations have come to light, adding to the now classic story of an illegitimate child from Baltimore who rose to become the mistress of the king of England and brought about his abdication. Wallis gained control of the Monarch through sexual techniques learned in China, but risked losing everything through a reckless, long-term affair with William Bullitt, US Ambassador to France. Newly released FBI files demonstrate, as no other source has done, the extent of the Duchess's espionage activities and how she conspired against Britain in the interest of Hitler. This is an intimate and extraordinary account of the woman who very nearly became the Queen of England.

'A rattling read' Mail on Sunday

Charles Higham is the author of many bestsellers including Kate: The Life of Katharine Hepburn and Trading with the Enemy. For many years New York Times Hollywood correspondent, he received the prestigious prize for the Creators of the Academie Francaise for his life of Marlene Dietrich.

GOR001135446
Mrs Simpson: Secret Lives of the Duchess of Windsor by Charles Higham
Charles Higham
Used - Very Good
Paperback
Pan Macmillan
2005-10-07
576
0330426788
9780330426787
N/A
Book picture is for illustrative purposes only, actual binding, cover or edition may vary.
This is a used book - there is no escaping the fact it has been read by someone else and it will show signs of wear and previous use. Overall we expect it to be in very good condition, but if you are not entirely satisfied please get in touch with us.