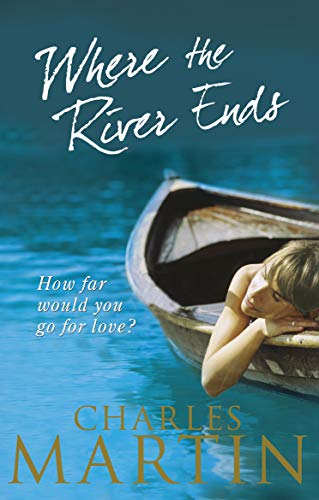 Where the River Ends
by Charles Martin

In Stock
£4.49
Abbie and Chris had married quickly and secretly, returning to face her parents' objections that haven't faded even after over fourteen years of marriage. But as they head for river's end, racing against weather and time, Abbie's father, the press and the police are determined to find them and bring Abbie home...
Very Good
5 in stock

Where the River Ends Summary

Where the River Ends by Charles Martin

'Nobody fights forever, so I prepared myself for two battles. The first was fighting alongside her.We've done that.As well as two can.But, as the years have ticked by, I've seen a second front coming - and it's the tougher of the two. Abbie might still be swinging but she was beat. To be honest, I think she was still in the ring fighting, simply for me. Lately, the thing that had been keeping me up nights was wondering what would happen if I told her that she could let her guard down - that she could stop fighting. What if she was just waiting on me?' Chris Michaels and Abbie Colman should never have met let alone fallen in love. As the only child of South Carolina's most senior senator, Abbie's father had wanted better for her than Chris, who grew up in a trailer park next to the St Mary's river. Abbie and Chris had married quickly and secretly, returning to face her parents' objections that haven't faded even after over fourteen years of marriage. But now Abbie and Chris are coming to the end of the road. Diagnosed with breast cancer four years before, Abbie's case is now terminal and they've run out of options. Rather than letting Abbie spend her final days in a cold, sterile hospital room, Chris packs their bags and steals away with her in the middle of the night. They carry with them Abbie's 'wish list' - ten things she wants to do before she dies. The wishes are simple, normal; because after four years of non-stop invasive medical treatments, 'normal' is a fleeting memory. Along with taking a final trip with Chris on the river that holds so many memories for them both, Abbie wants to dance with her husband, drink wine on a beach, laugh until it hurts. But as they head for river's end, racing against weather and time, Abbie's father, the press and the police are determined to find them and bring Abbie home...

Where the River Ends Reviews

"Have plenty of tissues and waterproof mascara to hand this is a great big, beautiful weepie. Wonderfully written, heartbreaking and hopeful. I couldn't put it down." * Carole Matthews *
"A powerful love story" * OK Magazine *
"Touching novel...must-read book...Hankies ready!" * Bella *
"In the tradition of Nicholas Sparks & Robert James Waller, Martin has fashioned a heartbreaking story" * Publishers Weekly *

Charles Martin lives in Jacksonville, Florida with his wife and family.

GOR000802417
Where the River Ends by Charles Martin
Charles Martin
Used - Very Good
Paperback
Ebury Publishing
2008-07-24
384
0091927005
9780091927004
N/A
Book picture is for illustrative purposes only, actual binding, cover or edition may vary.
This is a used book - there is no escaping the fact it has been read by someone else and it will show signs of wear and previous use. Overall we expect it to be in very good condition, but if you are not entirely satisfied please get in touch with us.