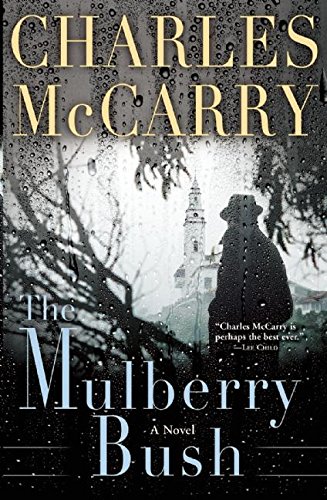 The Mulberry Bush
by Charles McCarry

The Mulberry Bush by Charles McCarry

The latest masterpiece from one of our finest modern espionage novelists, The Mulberry Bush burns with the fury of the wronged, as personal vendetta and hidden past collide.

In a rose garden in Buenos Aires, an unnamed American spy meets the beautiful daughter of a famous Argentinean revolutionary. He becomes infatuated, and so does she. But he is no ordinary spy--he is an off-the-books lone wolf who spent his first five years at Headquarters hunting terrorists in the Middle East. Unbeknownst to his lenient handlers, he is loyal to a hidden agenda: to avenge his father, who was laughed out of Headquarters years earlier. In the sultry young Argentinean, Luz, the spy thinks he has found an ally for his secret mission. Like his father, her parents also met a terrible fate at the hands of the government. But as his purposes become further entwined with hers, and that of a Russian embassy official he meets through Luz's connections, the spy finds himself caught in a perilous web of passions, affiliations, and lies that spans three continents and stretches back to the Cold War. Steeped in the knowledge of modern-day tradecraft, The Mulberry Bush is a potent and seductive novel that explores what happens when the most powerful political motivator is revenge.

Praise for The Mulberry Bush

"Blending old-time yarns with a contemporary saga of payback and political intrigue . . . McCarry merges time-honored tradecraft with the technology of the day . . . [His] real-life cloak-and-dagger work is long past. But he's clearly banked plenty of know-how from those days, and he continues to parcel it out in entertaining spy novels like this one."--Washington Post

"Charles McCarry is criminally underrated: The former CIA operative has been writing brilliant thrillers under the radar for decades--the latest being The Mulberry Bush . . . McCarry's twisty plot doubles back on itself multiple times, keeping us off-kilter to the last moment."--Seattle Times

"Is there a thriller writer alive today who both worked for the CIA and wrote speeches for Eisenhower? Yes, there is--and McCarry, after his spectacular early career, has achieved remarkable success as a novelist. In his latest book, a young spy infiltrates the CIA to avenge the death of his father."--Financial Times, "The FT's best books of 2015"

"[An] exceptional spy novel . . . McCarry spins his riveting story in unexpected ways; the writing is always subdued but brilliant, leading unsuspecting readers to collide straight into the unforgiving wall of a stunning ending."--Publishers Weekly (starred review)

"Treat the mystery lover on your list to this thrilling Buenos Aires-based spy tale from The Shanghai Factor author Charles McCarry."--Parade

"Like Shakespeare's Prince Hamlet, the protagonist in this new novel from McCarry is a young man set on avenging the grievous wrong done to his deceased father . . . Just as Hamlet ends with an intricately choreographed scene of violent death, this novel concludes in a crescendo of lethal treachery, but not before McCarry, who has mined the rich vein of spycraft for decades, dazzles us with smart dialog, fascinating characters, and local exotica of wonderful variety and authenticity."--Library Journal

"McCarry is a well regarded espionage novelist . . . As one frequently discovers in the world of espionage very little is as it appears and The Mulberry Bush's protagonist . . . must do battle with his own employers. Needless to say, McCarry knows how the game is played and tells it well."--Our Man in Boston

"Classic noir themes of trust, motive, and tarnished ideals spin through this mordant, cerebral thriller about an agent on a two-tiered mission. Veteran thriller author and former CIA op McCarry opens this latest with a cracking good setup."--Kirkus Reviews

"McCarry is one of the finest spy novelists in the world, with 13 masterful novels to prove it . . . Serpentine and stylish, McCarry has the late Eric Ambler's elegant sureness of touch."--Daily Mail (UK)

"A slow, cerebral thriller than nonetheless offers a persuasive account of the realities of the espionage life."--Mail on Sunday (UK), "Thriller of the Week"

"Charles McCarry is perhaps the best ever."--Lee Child, bestselling author of the Jack Reacher series, on The Shanghai Factor

"Recognized as a spy novelist of uncommon gifts."--Washington Post, on The Old Boys

Charles McCarry worked under deep cover as a CIA operations officer in Europe, Asia, and Africa. He is the author of thirteen critically acclaimed novels, including The Shanghai Factor, The Miernik Dossier, and the classic spy thriller The Tears of Autumn, as well as numerous works of nonfiction.

GOR009965536
The Mulberry Bush by Charles McCarry
Charles McCarry
Used - Well Read
Paperback
Grove Press / Atlantic Monthly Press
2016-12-29
320
0802125573
9780802125576
N/A
Book picture is for illustrative purposes only, actual binding, cover or edition may vary.
This is a used book - there is no escaping the fact it has been read by someone else and it will show signs of wear and previous use. Overall we expect it to be in very good condition, but if you are not entirely satisfied please get in touch with us.