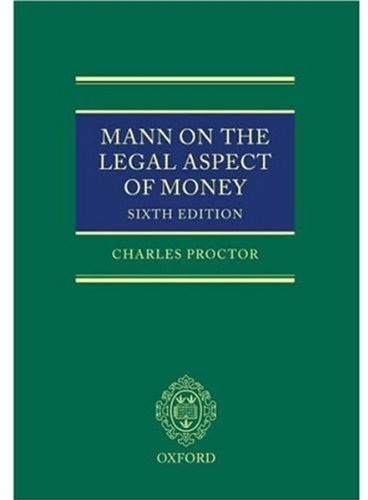 Mann on the Legal Aspect of Money
by Charles Proctor

Out of Stock
£3.99
Considering money both in a domestic and an international context, this book places particular emphasis on factors that may have an adverse impact on monetary obligations, such as depreciation, devaluation and exchange control. It includes a review of the consequences of the union for the national sovereignty of eurozone Member States.
Good
Only 0 left

Mann on the Legal Aspect of Money Summary

Mann on the Legal Aspect of Money by Charles Proctor

The long-awaited sixth edition of Mann on the Legal Aspect of Money takes account of a number of significant developments since the last edition was published in 1992. Without question, the completion of monetary union in Europe is the key achievement of the intervening years. An entirely new section of the book deals with this subject in detail; apart from private law aspects, the contentious issue of eurozone monetary sovereignty is considered and the text also discusses the possible consequences of the breakdown of the single currency area. The text also includes a review of the Rome Convention on the Law Applicable to Contractual Obligations and its consequences in the monetary field. At a more general level, the book reviews the legal meaning of the term "money" and considers whether traditional definitions can stand in the light of technological and other developments. The book also considers the nature and character of monetary obligations, including the consequences of non payment, devaluation, inflation and revalorisation. In the cross-border sphere, separate parts of the text are devoted to exchange control (including Article VIII (2)(b) of the IMF Agreement and the private international law of exchange control) and to the public international law of money (including the monetary law of inter-state obligations, treaty rules of monetary conduct and the protection of foreign monetary systems).

Charles Proctor is a Solicitor with some 25 years experience gained both in London and in the Far East. He has practised extensively in the fields of banking, securities and international finance, and has previously published two books and numerous articles on various aspects of financial law.

GOR010197687
Mann on the Legal Aspect of Money by Charles Proctor
Charles Proctor
Used - Good
Hardback
Oxford University Press
2005-04-07
904
0198260555
9780198260554
N/A
Book picture is for illustrative purposes only, actual binding, cover or edition may vary.
The book has been read but remains in clean condition. All pages are intact and the cover is intact. Some minor wear to the spine.