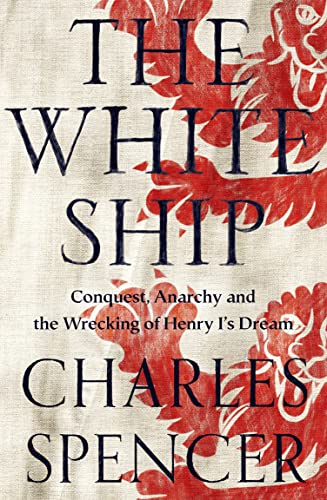 The White Ship by Charles Spencer

'As gripping as any thriller. History doesn't get any better than this' BILL BRYSON

'A brilliant read ... Spencer has a real facility for getting these characters to leap fully formed from the page ... Game of Thrones but in the real world' ANTHONY HOROWITZ

The White Ship: Conquest, Anarchy and the Wrecking of Henry I's Dream by Charles Spencer

'As gripping as any thriller. History doesn't get any better than this' BILL BRYSON

'A brilliant read ... Spencer has a real facility for getting these characters to leap fully formed from the page ... Game of Thrones but in the real world' ANTHONY HOROWITZ

'The medieval Titanic ... Charles Spencer explores with brilliance ... the gripping, tragic story of the White Ship ... and brings it to vivid and thrilling life in this superb book' KATE WILLIAMS

PICKED AS A BEST BOOK OF THE YEAR 2020 BY THE DAILY TELEGRAPH, THE GUARDIAN, THE DAILY MAIL AND THE DAILY EXPRESS.

The sinking of the White Ship on the 25th November 1120 is one of the greatest disasters that England has ever suffered. Its repercussions would change English and European history for ever.

King Henry I was sailing for England in triumph after four years of fighting the French. Congregating with the king at the port of Barfleur on that freezing night was the cream of Anglo-Norman society, including the only legitimate heir to the throne. By 1120, Henry was the most formidable ruler in Europe with an enviable record on the battlefield, immense lands and wealth and unprecedented authority in his kingdoms. Everything he had worked for was finally achieved, and he was ready to hand it on to his beloved son, William AEtheling.

Henry I and his retinue set out first. The White Ship - considered the fastest afloat - would follow, carrying the young prince. Spoilt and arrogant, William had plied his comrades and crew with drink from the minute he stepped aboard. It was the middle of the night when the drunken helmsman rammed the ship into rocks. There would be only one survivor from the gilded roll call of passengers...

Charles Spencer evokes this tragic and brutal story of the Normans from Conquest to Anarchy. With the heir dead, a civil war of untold violence erupted, a game of thrones which saw families turn in on each other with English and Norman barons, rebellious Welsh princes and the Scottish king all playing a part in a bloody, desperate scrum for power.

'How a drunk teenager shipwrecked the monarchy ... As colourful and racy narrative history goes, this absolutely gallops ... Whips through a hundred years of complex history from the Norman Conquest to Henry II' Daily Mail

'Rooted in the medieval chronicles, but crafted like a Hollywood thriller. Spencer is one of the finest narrative historians around'
Mail on Sunday

'Charles Spencer is a gifted storyteller ... Pivoted on one single, tragic winter evening. It is an event and a period of history that should be better known, and now it will be'
The Times

'Spencer proves himself more than a match for the story. He guides the reader well through the dramatic twists and turns of these years, which first placed Henry on the throne, then seemed set to deny the succession of his progeny. Spencer has a particularly good eye for detail, enriching his account with vivid pen-portraits of the main players ... Fast-paced and immensely enjoyable'
Literary Review

'Neglected by popular historians, [Henry I] ... has found a master storyteller in Charles Spencer ... rooted in excellent historical research ... a lyrical, vivid and compelling portrait. He succeeds in bringing to life huge characters from nearly a millennium ago'
Spectator

'An exhilarating narrative full of incident and insight. Here is the story, marvellously told, of the post-Conquest kings - and one almost-queen - of England: unpredictable, violently dramatic, and never less than compelling' Helen Castor

'Told with verve and an exceptional eye for detail, this is the story of how a single catastrophe changed the course of British history forever. Dramatic, compelling and utterly addictive'
Tracy Borman

'The medieval Titanic ... Charles Spencer explores with brilliance ... the gripping, tragic story of the White Ship ... and brings it to vivid and thrilling life in this superb book'
Kate Williams

Charles Spencer was educated at Eton College and obtained his degree in Modern History at Magdalen College, Oxford. He was a reporter on NBC's Today show from 1986 until 1995, and is the author of seven books, including the Sunday Times bestsellers Blenheim: Battle for Europe (shortlisted for History Book of the Year, National Book Awards) and Killers of the King: The Men Who Dared to Execute Charles I.

NGR9780008296803
The White Ship: Conquest, Anarchy and the Wrecking of Henry I's Dream by Charles Spencer
Charles Spencer
New
Hardback
HarperCollins Publishers
2020-09-17
352
0008296804
9780008296803
N/A
Book picture is for illustrative purposes only, actual binding, cover or edition may vary.
This is a new book - be the first to read this copy. With untouched pages and a perfect binding, your brand new copy is ready to be opened for the first time
Trustpilot