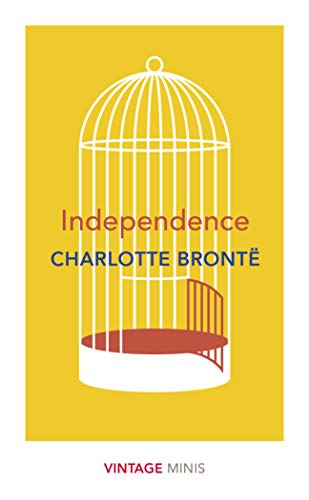 New Price
£4.09
Free Shipping in the UK
Both are the unforgettable creations of the deeply independent and brilliant Charlotte Bronte.

'To myself alone could I look'

Jane Eyre and Lucy Snowe are heroines who depend upon no one but themselves. In the face of hardship, from small sacrifices to great heartache, they cling resolutely to their principles of self-reliance. Lucy's energy and enterprise take her to Belgium and a career in teaching, whilst Jane's honest, intelligent mind draws declarations of love. Both are the unforgettable creations of the deeply independent and brilliant Charlotte Bronte.

Also in the Vintage Minis series:
Sisters by Louisa May Alcott
Freedom by Margaret Atwood
Marriage by Jane Austen
Liberty by Virginia Woolf

They look good and read well. That's win/win in our book * Stylist *
Literature for the Twitter generation * Big Issue *

Charlotte Bronte was born on 21 April 1816. Her father was curate of Haworth, Yorkshire, and her mother died when she was five years old, leaving five daughters and one son. In 1824 Charlotte, Maria, Elizabeth and Emily were sent to Cowan Bridge, a school for clergymen's daughters, where Maria and Elizabeth both caught tuberculosis and died. The children were taught at home from this point on and together they created vivid fantasy worlds which they explored in their writing. Charlotte worked as a teacher from 1835 to 1838 and then as a governess. In 1846, along with Emily and Anne, Charlotte published Poems by Currer, Ellis and Acton Bell.After this Emily wrote Wuthering Heights, Anne wrote Agnes Grey and Charlotte wrote The Professor. Wuthering Heights and Agnes Grey were both published but Charlotte's novel was initially rejected. In 1847 Jane Eyre became her first published novel and met with immediate success. Between 1848 and 1849 Charlotte lost her remaining siblings: Emily, Branwell and Anne. She published Shirley in 1849, Villette in 1853 and in 1854 she married the Rev. Arthur Bell Nicholls. She died the next year, on 31 March 1855.

NGR9781784876050
Independence: Vintage Minis by Charlotte Bronte
Charlotte Bronte
Vintage Minis
New
Paperback
Vintage Publishing
2020-03-03
144
1784876054
9781784876050
N/A
Book picture is for illustrative purposes only, actual binding, cover or edition may vary.
This is a new book - be the first to read this copy. With untouched pages and a perfect binding, your brand new copy is ready to be opened for the first time.