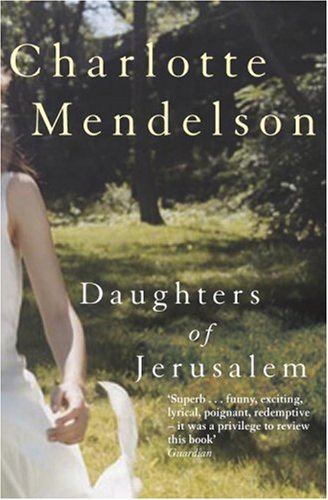 Daughters of Jerusalem
by Charlotte Mendelson

In Stock
£3.99
A captivating tale of hidden love and secret hatred, by the author of Love in Idleness
Well Read
Only 1 left

Daughters of Jerusalem by Charlotte Mendelson

Behind a crumbling facade of seeming normality, secrets begin to stir within the Lux family home. Jean Lux, constrained academic wife and guilty mother, is waiting for excitement - and it will come from an unexpected source. Meanwhile Eve, her intelligent elder daughter, luxuriates in wounded jealousy, until her loathing for her only sister verges on the murderous.

Into this climate of static repression and bitterness enters Raymond Snow, the deadly rival of Jean's husband, who begins to show interest in the vulnerable Eve. Meanwhile, Jean's best friend, Helena, has something she is yearning to tell: a confession that may alter everyone's life forever.

Beautifully written and very funny Daughters of Jerusalem is a tale of hidden love and hatred, of the need to belong and the desire for escape.

Charlotte Mendelson's last novel, When We Were Bad, was shortlisted for the Orange Prize for Fiction, and was chosen as a book of the year in the Observer, Guardian, Sunday Times, New Statesman and Spectator. She is also the author of Love in Idleness and Daughters of Jerusalem, which won both the Somerset Maugham Award and the John Llewellyn Rhys Prize. Almost English is her fourth novel. www.charlottemendelson.com @CharlotteMende1

GOR000868725
Daughters of Jerusalem by Charlotte Mendelson
Charlotte Mendelson
Used - Well Read
Paperback
Pan Macmillan
2004-02-06
320
0330482785
9780330482783
Winner of Somerset Maugham Award 2004 (UK) Winner of John Llewellyn Rhys Prize 2003 (UK) Short-listed for Sunday Times Young Writer of the Year Award 2003 (UK)
Book picture is for illustrative purposes only, actual binding, cover or edition may vary.
This is a used book - there is no escaping the fact it has been read by someone else and it will show signs of wear and previous use. Overall we expect it to be in very good condition, but if you are not entirely satisfied please get in touch with us.